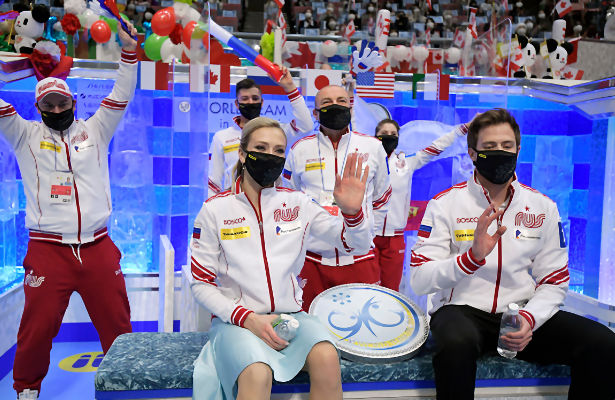 The 2021 ISU World Team Trophy kicked off a three-day competition with the Rhythm Dance, followed by the Ladies’ and Men’s Short Program in Osaka, Japan, on Thursday. Team Russia currently leads with 49 points, followed by Team USA (47) and Team Japan (42).

The ISU World Team Trophy format is based on a competition consisting of the six best national teams from ISU Members with a special provision for the host ISU Member to be included as a Qualified Member. Competing in this seventh edition of the event, are: Canada, France, Italy, Japan, Russia, and the United States. Each team is composed of two Men and Ladies’ single skaters, one pair team, and one ice dance team. Each team nominates a Captain who represents the team.

Newly-crowned world champions Victoria Sinitsina and Nikita Katsalapov produced level-four twizzles in their performance to “Singin’ in the Rain” and also earned many high positive grades of execution (GOE) for their level-four rotational lift. The midline steps were graded a level three and they scored 86.66 points.

Evgeni Semenenko produced a quad toe-triple toe, quad Salchow, and triple Axel in his routine to “The City Which Doesn’t Exist” while showing two level-four spins and footwork. The national junior champion scored a new personal best of 88.86 and is in seventh place.

Performing to “Let’s Get Loud” by The Baseballs, Mikhail Kolyada landed a quad toe-triple toe, but turned out a triple Axel and hung on to a triple Lutz. The national champion also showed good level-four spins and footwork, and scored 93.42 points for fifth place.

Elizaveta Tuktamysheva showed confidence in her routine to “Lovely” by Billie Eilish and Khaled which featured a solid triple Axel, triple Lutz-triple toe and triple flip. Two spins and the footwork were graded a level four and all elements received many positive GOES, and the World silver medalist is currently in second place with 80.35 points.

Anna Shcherbakova received an edge call on a triple flip, but the double Axel and triple Lutz-triple toe were solid. All spins and footwork in her routine to “O doux printemps d’autrefois” were graded a level four and all elements received high GOES, and the World champion is currently in first with a new personal best of 81.07 points.

“Today was a very good day for the Russian team,” said team captain Tuktamysheva. “All of us did a great job, the girls, the boys, the dancers. I am very happy how it turned out and I hope that in the next days our team shows the same high level of skating and we remain in first place. Hopefully as captain, I will try to pass on some energy to the guys for good performances so that we all can be pleased. I think we all know that the Russian team is very strong and we want to try to prove this one more time and have fun.”

National bronze medalists Kaitlin Hawayek and Jean-Luc Baker scored 76.79 points for their crowd-pleasing routine to Saturday Night Fever which was highlighted by level-three midline steps, a level-four curve lift and twizzles which were graded a level three for her and level four for him.

Jason Brown delivered a solid performance to “Sinnerman” which featured a triple flip, triple Axel, and triple Lutz-triple toe. All spins and footwork were graded a level four with many positive GOEs and the national bronze medalist is currently in third with 94.86 points.

Bradie Tennell underrotated the back end of a triple Lutz-triple toe and slightly underrotated a triple flip. The footwork was only graded a level two, but all spins garnered a level 4 with positive GOES. The national champion earned 67.40 points for her routine to “Moderation” by Florence and the Machine, placing fifth.

Karen Chen fell on her opening triple Lutz-triple toe and later underrotated a triple loop. The national bronze medalist only received a level two on the footwork, but two spins were rated a level four and she sits in sixth place (62.48).

“I’m super, super proud of my teammates today!” team captain Brown said. “World Team Trophy is just such a fun event! I just love the opportunity to be here and skating in front of an audience. You know what was really exciting today, a couple of us had season bests. I’m just looking forward to another great day tomorrow.”

Misato Komatsubara and Timo Koleto showed character right from the start in their dance to music from Dreamgirls, earning a level four on the twizzles and level three on the curve lift and pattern steps. The three-time national champions scored 66.42.

Shoma Uno is currently in ninth place (77.46) after struggling with his jumps. The national silver medalist stepped out of a quad flip, fell a on a quad toe, and turned out a triple Axel.

The only mistake Yuzuru Hanyu made was when he turned out a triple Axel. The two-time Olympic champion, who sits in second (107.12), otherwise produced a solid quad flip and quad toe-triple toe. All spins and footwork were graded a level four and he also was awarded with many high positive GOEs.

Performing to “The Fire Within” by Jennifer Thomas, Rika Kihira fell on an underrotated triple Axel and slightly underrotated the back end of a triple flip-triple toe, but the triple loop was clean. The two-time Four Continents champion showed very good level-four spins which received many positive GOES and she is currently in fourth with 68.74 points.

Kaori Sakamoto racked up tons of high GOEs in her program which featured a double Axel, triple Lutz and triple flip-triple toe. The national silver medalist earned a level four on all spins and footwork and is in third place with a new personal best of 77.78 points.

“All of us are actually coming back from the Worlds,” team captain Ryuichi Kihara pointed out. “It’s truly a consecutive competition and we didn’t have a lot of time after getting back home, in addition to the fact that we had to get ourselves isolated. So the preparation was a little bit different from normal. But compared to what we had to go through, I really think that all of the members of Team Japan did really well and that we were able to give courage to the Japanese audience in some way.”

Performing to music from the Mamma Mia! soundtrack, Adelina Galyavieva and Louis Thauron showed great expression throughout, showing a level-four stationary lift which earned many positive GOEs. The twizzles were graded a level four while the midline steps a three, and the national champions scored a career best of 70.34.

Adam Siao Him Fa landed a quad toe-double toe, but turned out a quad Salchow and stepped out of a triple Axel in his “Star Wars” routine. Despite the mistakes, the national silver medalist still managed a new personal best of 78.28 for his efforts and is currently eighth.

Kevin Aymoz put out a clean routine which featured a quad toe-triple toe, triple Lutz, and triple Axel. Two spins were graded a level four, as well as the steps which received many high positive GOEs and the national champion sits in fourth with 94.69 points.

Performing to “Je vole” by Louane, Maia Mazzara landed a double Axel, but turned out a triple Lutz and slightly underrotated the back end of a triple flip-triple toe. The national silver medalist is currently in 11th place with 55.31 points.

Lea Serna sits in 12th place with 55.28 points. The national champion fell on a triple flip, but landed a double Axel and triple Lutz-double toe in her routine to “Experience” by Ludovico Einaudi.

Charlene Guignard and Marco Fabbri met all key points in their level-four Finnsteps and also earned a level four on the midline steps in their routine to much from Grease Live! The twizzles were graded a level four for her and three for him, and the straight-line lift, also a level four, received many positive GOES. The three-time and current national champions scored 82.93 points.

Daniel Grassl struggled with his jumps, falling on an underrotated quad Lutz and triple Axel. The national champion also underrotated a quad flip (in combination with a triple toe) and scored 67.32 points for 10th place.

Matteo Rizzo withdrew from the event on April 11, 2021, however no reason was given.

Ginevra Lavinia Negrello earned a new personal best (59.55) for eighth place after a good skate to music from Game of Thrones. The national silver medalist slightly underrotated the back end of a triple toe-triple toe, but the solo triple toe and double Axel were clean and she was awarded a level four for two spins.

Lara Naki Gutmann turned out the back end of a triple toe-triple toe and received an edge call on triple Lutz, but the double Axel was clean and all three spins were graded a level four. The national champion scored 60.45 points for her routine to “The Sheltering Sky” by Ryuichi Sakamoto.

Carolane Soucisse and Shane Firus displayed good synchronized twizzles which were graded a level four for her and three for him in their routine to music from Jersey Boys soundtrack. The stationary lift was graded a level four with positive GOES and the national bronze medalists scored 65.06 points for sixth place.

Skating to “Exogenesis Symphony Part III” by Muse, Roman Sadovsky landed a solid quad Salchow and triple Axel, but the back end of a triple Lutz-triple toe was slightly underrotated. The national champ also showed three level-four spins and earned a new personal best of 89.61 points for sixth place.

Nam Nguyen took a fall on an underrotated quad Salchow, but recovered to land a triple Axel and triple flip-double toe in his routine to “Blues for Klook” by Eddy Louiss. The national silver medalist sits in 11th place with 66.89 points.

Gabrielle Daleman stepped out of a triple toe-triple toe and put a hand down on a Lutz that was doubled and received no points. However, the double Axel was clean and the two-time national champion earned positive GOEs for two level-four spins in her “Carmen” routine, finishing 10th with 57.22 points.

Alison Schumacher slightly underrotated the back end of a triple flip-triple toe, as well as a triple loop, but landed a double Axel and showed two level-four spins. She scored 59.19 points for ninth place after her routine to “Clair de Lune” by Claude Debussy.