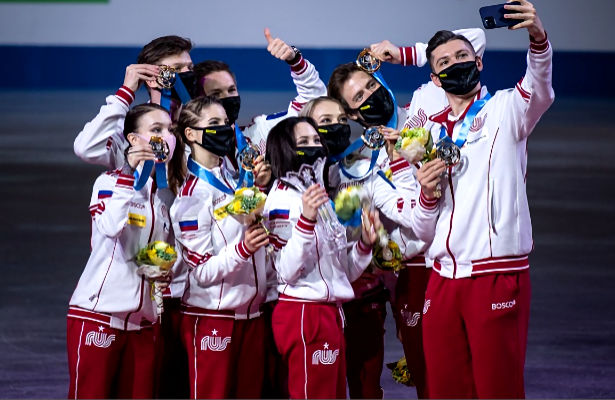 The 2021 ISU World Team Trophy concluded with the Ladies’ and Pairs’ Free Skate in Osaka, Japan, on Friday. Team Russia won the event with 125 points, followed by Team USA (110) and Team Japan (107).

The ISU World Team Trophy format is based on a competition consisting of the six best national teams from ISU Members with a special provision for the host ISU Member to be included as a Qualified Member. Competing in this seventh edition of the event, are: Canada, France, Italy, Japan, Russia, and the United States. Each team is composed of two Men and Ladies’ single skaters, one pair team, and one ice dance team. Each team nominates a Captain who represents the team.

Anastasia Mishina and Aleksandr Galliamov were flawless in their routine to “Bohemian Rhapsody” by Queen, good side-by-side triple Salchow-Euler-triple Salchows and triple toes. The newly-crowned world champions garnered many high positive grades of execution (GOE) for their level-four triple twist and throw triple Lutz and all lifts and spins were graded a level-four. The throw triple loop was also solid and the team earned a new personal best of 151.59 points.

Elizaveta Tuktamysheva earned 146.23 points for her technically strong routine to “Chronicles of a Mischievous Bird” by Bkhima Iunusov which featured a solid solo triple Axel and triple Lutz-triple toe. The 2021 World silver medalist landed a total of six clean triple jumps and earned a level four on the layback spin, but turned out the landing of her opening triple Axel (in combination with a double toe) and stepped out of the back end of a double Axel-Euler-triple Salchow.

Anna Shcherbakova stepped out of her opening quad flip, but that was the only mistake in her brilliant, yet demanding, routine which featured music from The Home of Dark Butterflies soundtrack. The 2021 World champion landed a total of seven clean triple jumps, including a triple flip-triple toe and triple Lutz-triple loop, and displayed excellent level-four spins and footwork throughout. She scored 160.58 points.

“I am so proud of my team,” said team captain Tuktamysheva. “After a difficult World Championships, we had only two weeks to get back in shape and we skated well. We are so happy to be here and we enjoyed every moment. Our secret–we have a very strong team–girls, boys, pairs and ice dance. To finally be in first place (at World Team Trophy) means a lot to us. This is a little practice of the Olympic Games. It is important to have World Team Trophy before the Olympic Games, now we know what to do.”

Skating to “Fall On Me” and “Immersive Light of Love,” Alexa Knierim and Brandon Frazier opened with a level-three triple twist, side-by-side triple toe-double toe-double toes and a very good throw triple loop. Knierim stepped out of the triple Salchows and put a hand and foot down on the throw triple flip, but all lifts and the pair combination spin received a level four. The national champions earned a new personal best of 133.63.

Karen Chen landed a double Axel-triple toe, triple Lutz, and triple loop-double toe, but underrotated a triple flip and fell on a tripe Lutz. She also underrotated the first jump in a triple Salchow-double toe, turning out the last jump. The national bronze medalist also showed good spins and footwork in her “Butterfly Lover Concerto” routine and earned 127.24 points.

“I know, I said this a lot this week, but I’m just so proud of Team USA, I’m so proud of their fight, of their heart and courage out there!” said Jason Brown. “We are just all so grateful to be here and to be in front of an audience. “It’s so special to be in Japan, it’s always so special like the cherry on top. We’re looking forward to returning home, taking a little break and then working towards the Olympic Season. The next step is making it to the Olympic team.”

Performing to “Woman” by Shawn Phillips, Riku Miura and Ryuichi Kihara showed a good level-three triple twist followed by side-by-side triple toe-double toe-double toes and a throw triple Lutz. Miura doubled her triple Salchow and stepped out of a throw triple loop, but all lifts and pair combination spin garnered a level four. The national champions scored a new personal best of 130.83 points for their efforts.

Rika Kihira opted to skate to last season’s “International Angel of Peace” routine as she’s recovering from a lower back injury. The two-time Four Continents champion fell on a triple flip-double toe and turned out the first jump in a double Axel-triple toe, but was otherwise solid. She landed a total of six clean triple jumps and displayed very good level-three footwork throughout to earn 132.39 points.

Kaori Sakamoto earned a new personal best for her dynamic routine to The Matrix which featured five solid triple jumps. The only mistakes were an edge call on a triple Lutz and a slightly underrotated triple Salchow. The 2018 Four Continents champion also showed very good level-four spins and level-three footwork while earning many positive GOEs throughout.

“I think all of us worked really hard, I’m very proud of my teammates,” said team captain Kihara. “After the World Championships, we didn’t have enough time to adjust and also there was quarantine and some boot issues. As a whole team, for the country of Japan, we fought well and I’m really proud.”

Nicole Della Monica and Matteo Guarise showed good effort and scored 128.24 points for their routine which featured level-four lifts and pair combination spin and a throw triple Salchow. Guarise stepped out of the opening triple Salchows and the triple toe-double toe combination, which reccieved negative GOES, was not in sync.

Lara Naki Gutmann fell on a triple toe-Euler-triple Salchow, turned out a double Axel (in combination with a double toe) as well as the landing of a triple Salchow, however, she landed a triple Lutz, triple loop, and triple toe. The national champion also showed good level-four spins and level-three footwork and earned a new personal best of 119.14 for her routine to Scheherazade.

Ginevra Lavinia Negrello stepped out of and put a hand down on the landing of her opening double Axel-triple toe and received an edge call on a triple Lutz. The national silver medalist also two-footed the landing of a triple flip, but landed a triple loop-Euler-double Salchow, and showed level four spins throughout her routine to “La terre vue du ciel” by Armand Amar, earning a new personal best of 110.65.

Lea Serna put a foot down on the back end of a triple flip-Euler-double Salchow, stepped out a double Lutz which was intended to be a triple, and underrotated a triple Salchow. However, the national champion showed a triple flip, triple Lutz-double toe and two double Axels in her routine to “Young and Beautiful” by Lana del Ray to score 97.63 points.

Lori-Ann Matte & Thierry Ferland had a messy catch on the triple twist and the team didn’t complete the triple toe-double toe combination in which Matted underrotated and touched down with a hand. Ferland stepped out of the triple Salchows, and while the throw triple loop was good, Matte double-footed the throw triple Lutz. The team from Quebec still showed a good level-four reverse lift and pair combination spin, and scored a new personal best of 101.83 points.

Alison Schumacher doubled her opening triple flip and slightly underrotated the back end of a double Axel-triple toe. She also underrotated the back end of a triple Salchow-double toe-double loop, but the triple flip-double toe, triple loop, and triple Salchow were clean. The national silver medalist also showed a good level-four layback spin and earned 111.98 points.