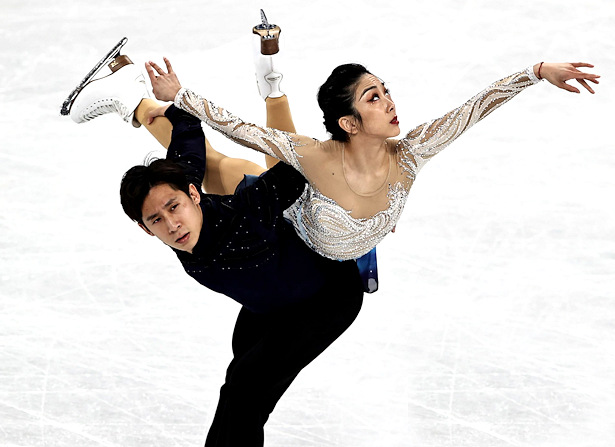 Wenjing Sui and Cong Han of China perform during the Pairs’ Free Skate on Day 15 of the Beijing 2022 Winter Olympic Games at Capital Indoor Stadium on February 19, 2022.

The Pairs’ Figure Skating for the 2022 Winter Olympics concluded with the Free Skate on February 19, 2022, at the Capital Indoor Stadium in the Haidian District of Beijing. It was a very close competition for the top three teams throughout. Wenjing Sui and Cong Han of China won the gold by a smidgen of 0.63 points ahead of Evgenia Tarasova and Vladimir Morozov (ROC). Anastasia Mishina and Aleksandr Galliamov (ROC) maintained third throughout to win the bronze in their debut at this event, trailing teammates by less than two points.

Sui and Han opened their program with a rare quadruple twist, followed by side-by-side triple toe-double toe-double toes. The two-time world champions underrotated the triple Salchows, but that was the only error in their moving routine to “Bridge Over Troubled Water.” All lifts and the spin were graded a level four and team also produced a solid throw triple flip and throw triple Salchow to earn a new personal best of 155.47 points.

“I’m so happy that I feel that my dream has come true!” said Sui. “I’d like to extend my gratitude to my motherland, which has held such magnificent Olympic Games and has supported our training with the best venues, and to my coach, to our big family, and to everyone supporting us. And also, we want to thank our parents, who must have gone through a lot in front of the TVs.”

“Today I am really happy,” agreed Han. “After four years of preparation, our dream finally came true in Beijing 2022 Winter Olympics. I want to thank my country, and so many people who have helped us through all the way towards today.”

Sui relayed that the team had went through “a lot” as not much was expected from them when they first teamed up 15 years ago.

“People said we were a pair of underdogs because our builds were not meant for figure skating,” she said. “Traditionally, men were expected to be tall and women petite. The key is the spirit of never giving up. We both had many injuries, and we were told by many people that we are not suitable for pair skating, so at first it seemed like there was no way for us.”

Tarasova and Morozov produced a very strong routine to “Lighthouse” by Patrick Watson. With little room on the table for mistakes, all the small details counted. Tarasova fought for the landing of the side-by-side triple Salchows and throw triple loop, but the triple toe-double toe-double toes were clean. The two-time world silver medalists also displayed level-four lifts and a very good throw triple flip and level-four triple twist to finish second in the free skate with a new personal best of 155.00. Their total score was 239.25.

“It’s the result of the work that was done,” said Morozov. “Looking at the way we performed during the season, we made edits after almost every competition, we changed things up. When we saw mistakes and problems, we corrected them. Our goal was to make each skate a more stable, clean version of the program.”

“When we stood in the final pose of the program, here you understand that you did well, that you skated clean and at that moment you have an explosion of emotions,” explained Tarasova of their display at the end of the performance. “It is happiness that everything worked at the right moment. You cannot hold them in.

“During the skate, the thoughts are only about the elements, the program,” she continued. “There are nso side thoughts. When the program finishes, everybody probably saw those emotions, which were impossible to contain. You understand that the performance was good and you are happy that it worked.”

While not perfect, teammates Mishina and Galliamov made no major mistakes in their routine to “The Snowstorm” by Georgi Sviridov. The 2021 World Champions produced side-by-side triple Salchows-Euler-triple Salchows and triple toes, as well as a throw triple flip and throw triple loop. The lifts, spin, and triple twist were graded a level four and the team placed third (154.95) in the Free Skate and overall (154.95) in their debut at this event.

“We are very proud of it,” said Galliamov of their performance. “We did all our elements well. It is a big moment for us, just to be able to see our families again and show what we achieved here is very important and emotional for us.”

“When we skated the program and all the elements went well there was this familiar feeling that if we do everything, if we do well, we are going to win,” said Mishina. “Here (free skating), we understood that maybe it will not work this way and we were just happy with the fact that we managed to do everything well. If an athlete does everything that he can, there is more happiness than disappointment. We will keep working. Third place gives us motivation to work harder.”

Skating to “Malaguena,” Aleksandra Boikova and Dmitrii Kozlovskii (ROC) nailed their opening triple Salchows, but Boikova slightly underrotated the first jump in the triple toe-double toe-double toes. She also stepped out of the throw triple loop, but those were the only two mistakes in an otherwise strong routine. The 2021 World bronze medalists also produced level-four lifts and spin, as well as a solid throw triple flip, to finish fourth in the Free Skate (141.91) and overall (220.50).

“Three years ago, we could have this score, but today, we should (have a) better score,” said Kozlovskii. “We are quite disappointed. We made every effort to prepare ourselves for this Olympic Games. The result is not as expected.”

“After the Russian Figure Skating Championship, we were used to the intense competition, training and the support from the audience,” he added. “But today we did not get the medal, which might be one of the most important medals in our life, so we were disappointed.”

China’s Peng Cheng and Jin Yang placed sixth in the Free Skate with a new season’s best of 138.74. Their routine to music from The Banquet soundtrack featured side-by-side triple toe-double toes, level four lifts, and two very good throw jumps: a triple loop and triple Salchow. Peng underrotated and stepped out of the the opening triple Salchows, but the triple twist was strong and the 2020 Cup of China Champions were able to maintain fifth overall with a total score of 214.84.

“We had a good performance today,” said Cheng, while congratulating teammates Sui and Han. “Today we performed our best. We enjoyed every moment and every move we made on the ice. No regrets.”

“After PyeongChang, we were under great pressure because we had the disappointing score,” said Yang. “Because for Chinese athletes in figure skating, we never had the tradition of not qualifying to the free skating.  It’s like a shame, but for the past few years, we remember the pain, and we wanted to rise from the low point.”

“During the past four years, we underwent a lot of mental pressures,” he added. “We try to prove ourselves, but possibly not in the best way because we haven’t been partners for a very long time. We did a lot of practice. We worked really hard and we used our maximum mental power to go through this. We supported each other mutually and that’s how we came here.”

USA’s Alexa Knierim and Brandon Frazier delivered a near-solid routine which featured a level-four triple twist, lifts, and spin, as well as a solid throw triple loop and throw triple flip. Frazier doubled the Salchows, but the triple toe-double toes were good and the 2021 Internationaux de France bronze medalists earned a new personal best of 138.45 for seventh in the Free Skate and sixth overall (212.68).

“It’s crazy, it’s nuts! said Frazier on hitting their new personal best. “I have so much appreciation for the whole team and my family taking a shot on me. I am forever in their debt for all their hard work. We weren’t even sure we would try out and now we are here at the Olympic Games!”

“It was a true dream come true, it was our true selves out there,” he added. “We didn’t let our nerves get the best of us. (We) made one technical error on the jump on my part, everything else we did was solid.”

Japan’s Riku Miura and Ryuichi Kihara finished fifth in the Free Skate with a new personal best of 141.04. Their routine to “Woman” by Shawn Phillips was highlighted by level-four lifts, a throw triple Lutz and throw triple loop. With a total score of 211.89, the 2021 Skate America silver medalists finished seventh overall.

“We had some mistakes in our short program, but we really enjoyed the free skating tonight, and the result was satisfying,” said Kihara. “We required ourselves not to make any mistakes yesterday in the short program, so we actually didn’t feel quite happy when skating. We only hoped there would not be big problems today, and it turned out to be a very enjoyable performance.”