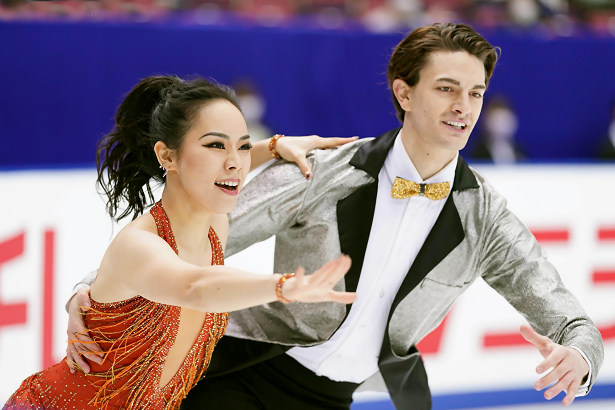 Two-time and defending champions Misato Komatsubara and Timothy Koleto took the lead in the Rhythm Dance on Saturday at the 2020-21 Japanese National Figure Skating Championships. The new team of Kana Muramoto and Daisuke Takahashi are currently in second, followed by reigning silver national silver medalist Rikako Fukase and Eichu Cho.

The husband-and-wife team of Komatsubara and Koleto reached all four key points in their engaging routine to music from the Dreamgirls soundtrack, earning a level four on the curve lift, twizzles, and one-foot steps in which all key points were met. The diagonal steps were graded a level 2 and she only received a level 3 on the pattern steps where he was a level 4. The 2020 NHK Trophy champions earned 71.74 points.

“Unfortunately, we couldn’t avoid our mistakes, but we had enough strength to stay expressive even until the end,” said  Komatsubara. “From that, you could see that we have become stronger since NHK. We were able to heat up the audience well.”

“We were able to express our piece to Dreamgirls a lot better than we did at NHK,” added Koleto, who was happy to be able to compete for the first time as a Japanese at this event. He is now known as Takeru Komatsubara.

Earlier, Muramoto and Takahashi, who are competing in their second event of their first season, had an accident during practice in which their feet got caught and Muramoto went down.  The team was concerned whether or not they would be able to deliver and Takahashi grew nervous.

“I panicked!” said  Takahashi. “At least she was able to get up on her own, so that calmed me down a little bit.”

“It all happened so fast that I didn’t realize it until I was already on the ground,” recalled  Muramoto. “It was my first time falling in such a way and I was appropriately surprised. When I squatted and distributed my weight on the knee, it already hurt a lot, but as soon as I stood, the pain subsided. I was very panicked, but I immediately said I was fine so as not to worry Dai. The pain did not return until later.”

The doctor gave her knee a brief check and the team, along with the coach and doctor, decided to perform five minutes before the event began.

Nevertheless, the The 2020 NHK Trophy bronze scored 67.83 points after their theatrical routine to music from The Mask. They showed some improvement as the twizzles were graded a level 4 for both skaters, as was the rotational lift. The midline steps garnered a level 3, however the team only met one key point in the one-foot steps which were a level 1. The pattern steps were a level 3 for her and 2 for him.

“Since NHK, we have improved a lot,” said Takahashi. “The applause from the audience was very uplifting and they welcomed us warmly. Last time, we were a bit cautious, but here we did our best and tried to change as much as possible in the short time. Changing technical elements was difficult, but we were able to work well on expression.”

“After NHK, we changed many things in our program and worked on bringing more speed,” added Muramoto. “We also wanted the movements and expression to be even bigger. We had the goal to fight for a good performance and it worked very well.”

Fukase and Cho sit in third with 62.02 after their performance to music from La La Land which featured level 4 twizzles and rotational lift. The 2020 NHK Trophy silver medalists also both received a level 3 on the pattern steps.

“Our score was a little lower than NHK, but I’m happy with our performance,” said Cho. “We had small mistakes, but it was ok. We will go home now and prepare for upcoming events. If there are no more competitions, then we will prepare for the future season. We could make a good development and we are very happy about it.”

“After NHK, we looked at the footage and realized that the noise on the ice was very loud,” added Fukase. “The coach also pointed that out to us, so we tried to perform a little softer.”

Kiria Hirayama and Aru Tateno are in fourth (56.61) in their debut, followed by Haruno Yajima and Yoshimitsu Ikeda (47.89).

What are your thoughts on the Rhythm Dance? Discuss here.