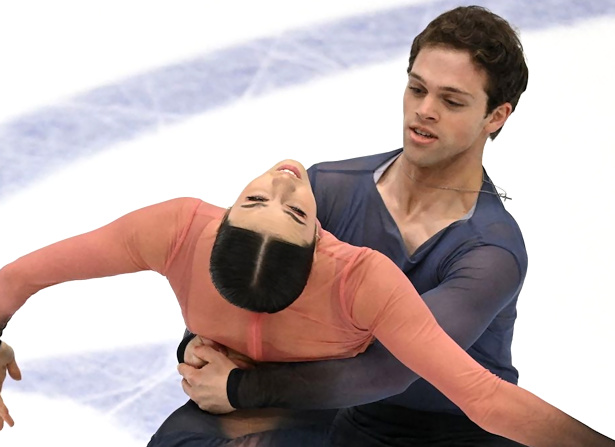 USA’s Caroline Green and Michael Parsons maintained their overnight lead in the Ice Dance event to win the title at the 2022 Four Continents Figure Skating Championships on Friday in Tallinn, Estonia. Kana Muramoto and Daisuke Takahashi of Japan earned the silver, while USA’s Christina Carreira and Anthony Ponomarenko pocketed the bronze.

Green and Parsons wove a tale with their intriguing routine to “Violin Concerto No. 1 “EsoConcerto”: II. Adagio” and “Clouds, The Mind on the (Re)Wind.” The team, which took bronze in both Challenger series events this season, produced level-four lifts and spin, earning many positive grades of execution (GOE) along the way. The twizzles were graded a level three for her and four for him, while the one-foot steps were a level three. They finished first in the free dance and overall with new personal best scores (119.97/200.59).

“It’s just been incredible!” said Green of winning the title. “This week has been amazing, and having such a quick turnaround from nationals is definitely difficult, but definitely so worth it. I feel like we grew so much as a team just from the last competition, and coming into this one, so much more confident in ourselves and our programs. I think it’s just really representative of the skates we put out.”

“I think the senior level championship title definitely means more to me and more to our career,” added Parsons. “I’m so proud and so happy and so thankful that we are here and we were able to skate our best and we were able to skate against such great teams. This was a great event and, especially here, you saw some very unique programs—both in the short and the free—and from so many different teams, too. It was a wonderful competition to watch!”

Green and Parson’s goal was to try to make the Olympic team, but they knew it was a long shot.

“Even while not making the team, we set ourselves up very well for the next four years and this is a great starting point right here,” said Parsons. “Not making the team is certainly a motivation.”

Muramoto and Takahashi gave a characteristic performance to La Bayadere displaying level-three diagonal steps and level-four lifts and spin. The one-foot steps were graded a level three for her and two for him and the the twizzles received a level four for her and three for him. The 2021 Warsaw cup silver medalists finished second in the free dance with 109.48 points and overall (181.91) in their debut at this event.

“I share precious memories with Chris (Reed, former partner) regarding ice dancing and we were also aiming for a victory,” said Muramoto, who was frustrated with the mistakes in the rhythm dance. “But I am also very happy that I was able to reach the podium with Dai and compete with the world. Even though we are only in our second season, we can fight with the whole world and I admire Dai a lot for that.”

“I’m tired,” admitted Takahashi. “We didn’t make any big mistakes, but some parts were a bit messy. I feel like I didn’t give 100 percent. We didn’t have that much time to practice before the Four Continents, so overall I think we did a good job.”

The 2010 Olympic bronze medalist in the Men’s event was very happy to be on the podium for the first time in an major ISU Championships as an ice dancer.

“I can hardly put my joy into words,” said Takahashi, “but I’m more frustrated that my performance was not so good. Last year I wouldn’t have felt that way, but this season I was able to gain a lot of experience and climb the podium. That’s not only because of Kana, but also because Marina (Zueva, coach) and many other people that supported us. Overall, I’m happy to have achieved all this. It all feels so sudden.”

Like many other skaters, who competed at their respective nationals, the two-time Japanese silver medalists did not have much time afterwards to train. They went back to Florida at the beginning of January and only had two weeks to work prior to the event.

“The last week we reviewed our techniques and elements,” said Muramoto. “We wanted to change a lot of things, but we didn’t have much time. Between the nationals and the Four Continents, we focused mainly on the Rhythm Dance and didn’t work so much on the Free Dance, but overall, even after yesterday’s fall, we were able to pick ourselves up and enjoy our performance. So we worked on the quality and on our confidence. We wanted to take another step forward and feel more confident in our own skating.”

This event was important for the Japanese team as they wanted to see how well they performed as they plan to compete next at Worlds.

“Our performance was quite frustrating, but we got a very good result and that gave us a lot of confidence,” said Muramoto. “We can prepare well and we want to be confident and train well so we can keep up with the best teams. We want to perform the rhythm dance without mistakes and perfectly.”

“We have a lot of time until the world championship to prepare everything,” noted Takahashi. “We want to have a short break first and then work on our programs again. Our goal here was to be on the podium. That will also be our goal for the World Championship and we want to achieve our best possible result this season by delivering a perfect performance.”

Carreira and Ponomarenko delivered a very expressive routine to “Wicked Game” performed by Daisy Gray and Yola Recoba. The 2018 World Junior silver medalists earned a level three on the stationary lift, but the the straightline-rotation combination lift was a level four as was the spin. She earned a level three on the twizzles while his were graded a level four and the diagonal steps were graded a level two. They earned a new season’s best of 106.32 for third in the free dance and finished third overall (175.67).

“We’re happy we’re able to end our season with our best free dance, I think,” said Carreira, “so yes, we’re overall really happy and we want to continue growing into the next quad.”

It’s been a challenging season for Carreira and Ponomarenko as they changed coaches and adjusted their skating technique. They only had a week to train at the Ice Academy of Montreal, so there was no room for down time after nationals.

“It was all mental preparation and finding the right cues to perform at our very best,” Ponomarenko said. “We were with Igor (Shpilband) for eight to nine years, so adapting to a new training style is very different and we want to get a little bit more comfortable in it and use that to the best of our ability for the next four years.”

The Olympics were not an option for this team as Carreira does not have U.S. citizenship, but their goal is to focus on the 2026 Olympics.

“We are just going to continue building until we get there,” said Carreira. “So we don’t really care that much about the points and results as far as we see the improvement and we keep building each year. That’s our main goal.”

Carolane Soucisse and Shane Firus of Canada earned a season’s best of 103.30 for their routine to music by Charles Aznavour. The 2018 Four Continents silver medalists earned a level four on the spin and lifts, but the diagonal steps were only graded a level one. The twizzles were a level four for her and three for him, while the one-foot steps were a level one for her and level two for him. They finished fourth overall with 172.45 points.

“We really liked our performance today,” said Firus. “I don’t think it was the easiest for us. We really had to dig deep on this one, but overall, we thought the audience was great and the event was run amazingly, so we were very happy about that.”

“It was a bit harder for us physically for some reason,” added Soucisse. “I guess jetlag and everything, but we still enjoyed both of our performances here and were happy.”

In terms of growth, the Soucisse and Firus feel they have been getting better with each time and that their programs are evolving and becoming “faster and bigger.”

“All season we’ve been working on consistency and doing better,” said Soucisse of their expectations in Tallinn. “We’ve been evolving throughout the season, and with the change of coach, it was harder for us.”

Performing to music by Elton John, USA’s Emily Bratti and Ian Somerville produced an engaging routine which featured level-four twizzles, lifts, and spin, but the young team did not score as high as their competitors in the program components. They finished fifth in the free dance and overall (101.82/169.54).

“It feels at ease skating with Emily,” said Somerville in their debut at this event. “We’re both just on the same page. I think because of all the support we’ve gotten, all the people who have worked so hard with us–Greg (Zuerlein, main coach), Charlie and Tanith (White), Dmitry (Ilin).”

Somerville feels that the storyline of their free dance shows some personality and character flaws in terms of thinking that he needs to be somebody else and tries to get away where he was raised in search of a better life.

“The program starts off with me trying to leave and then she pulls me back,” he explained. “The middle part is about trying to understand who we are.”

Bratti and Somerville, who teamed up in July, didn’t get the opportunity to have an “off-season” due to the time crunch.

“Now we get to really work on basics together, transitions,” said Somerville. “It will be a lot of fun and we’re really excited!”

“It’s really amazing,” added Bratti. “We’ve been working really hard all season and we’re very surprised that we are here, very happy about it, and really thankful for everybody.”

Marie-Jade Lauriault and Romain Le Gac of Canada started strong in their routine to “Some Nights” by Fun, which opened with a very good rotational lift, but she took an fall during the twizzles. The four-time national silver medalists finished sixth overall with 166.89 points.

“I think it was more a technical error, how it was done,” Lauriault explained of the fall. “It’s things that happen, it didn’t happen until now, but it happens. This is the program that we could present tonight, but it was a great experience today, these are still good memories.”

It’s been two years since Lauriault and Le Gac, married in 2015, have competed internationally after switching from France to Canada. Le Gac has lived in Canada for seven years and is in the process of getting his citizenship.

“It was not an easy decision to take,” said Lauriault. “With the pandemic, we certainly realized that we are very much at home in Canada, that our life is there. We felt that more and more as the years progressed, and Romain has established himself there as well. It is also complicated with me studying and Romain working in Canada. We were thinking about our future and whether we wanted to continue, but one day we told ourselves were are just skating for ourselves. We feel even more passionate now than we did before.”