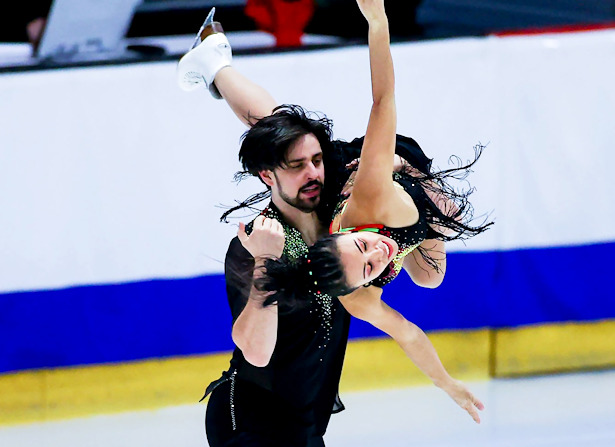 The past Olympic season was a roller coaster ride for German ice dancers Jennifer Janse van Rensburg, 29, and Benjamin Steffan, 26. They claimed their first National title over defending champions Katharina Muller and Tim Dieck, but narrowly lost the qualifying race for the Olympic Games to them. Then they were nominated for the ISU World Figure Skating Championships, which would have marked their World debut, but Steffan’s PCR test before leaving for France turned out positive and the ice dancers had to stay home in Oberstdorf, Germany.

“That was really a blow, because we had been preparing and we were very, very ready,” Steffan recalled. “According to Mr. (Martin) Skotnicky (national team coach), it was a catastrophe as we were so well prepared,” Janse van Rensburg chimed in. “He said he had never seen us like this and he was really hoping for something good from us.”

Meanwhile the skaters have overcome that disappointment. “It was really upsetting, but we told ourselves, we’ll just take this awesome preparation into the next season and into the time to come,” Steffan offered. “This work was not in vain, but it is something that we can take with us.”

After their season had ended, the dancers took part in a general coaching license course of the German Army in April and May. As they both serve as sport soldiers, they attend seminars and classes on a regular basis. In Germany, the Bundeswehr (Federal Army) sponsors high-level athletes. Additionally, Janse van Rensburg and Steffan are working on their figure skating coaching license. “It is great that we now have the opportunity to acquire that license while we are still active skaters. It is a good thing to have,” Janse van Rensburg pointed out.

Following their army course, the German Champions returned to their home base in Oberstdorf at the end of May and started to build their new Free Dance set to “Prelude (Age of Heroes)” by Hungarian composer Balázs Havasi. The idea came from Natalia Karamysheva, the wife and co-coach of their long-time coach Rostislav Sinicyn. The Ukrainian ice dance coach and choreographer Maria Tumanovska Chaika, who fled from the war in her home country and is now based in Oberstdorf, mounted the program. The ice dancers have worked with her in the previous years as well.

“Natalia Karamysheva heard this music and said she thought immediately of us,” Janse van Rensburg noted. “We listened to it when we were with the army and we were very excited about it right away. This this something we really see ourselves in.”

“It is a contrast to what we did last year,” Steffan added, referring to their James Bond-themed Free Dance of the 2021-22 season. “It is full of energy. It is demanding to skate to. The program itself is demanding the way we built it. It is interesting, energetic and powerful. I think this is something that we can portray quite well.”

For the Rhythm Dance, the dancers and their coaches selected two Samba pieces, “Safari” and “Move It” plus the Cha Cha “Havana” for the middle part. This routine was also choregraphed by Tumanovska-Chaika.

“We like the theme of the Rhythm Dance,” said Steffan. “It is interesting to see what happens now as the pattern dance part is gone. The compulsory dances were always a strong point of us, but it doesn’t mean that we are against the way it is now.”

However, the skaters do not feel that scoring will become less objective without the Pattern Dance portion.

“Judging in ice dance has always  always been a bit of a weird thing. This is something we can openly say, everyone knows about it,” Steffan said, laughing. “So I don’t think it will really make a difference with the compulsory dance part being removed.”

Additionally, his partner feels that the post-Olympic season is the right time to try something new and different in the sport.

“We have tried to use as few things as possible from the past,” Steffan explained. “So far we’ve kept only one lift, the rotational lift, from our past free dance. This is such a good lift that we thought we wanted to keep it, but everything else is really new. We are aiming at getting to the next level. We want to grow.”

In mid-July, the team went to work with Igor Shpilband and Pasquale Camerlengo in Novi, Mich., for three weeks, as they have done in the past, to get new and fresh input.

“We’ve worked on both programs as they were both relatively new and we only had the basic structure,” Janse van Rensburg shared. “Igor, Pasquale and the entire team had great ideas. Now it’s about getting mileage and skate back-to-back programs.”

Back in Oberstdorf, the Germans continue to fine-tune their programs and plan to take a week of vacation at the end of August before delving into the direct preparation for their first competition – the ISU Challenger Series event Nebelhorn Trophy, which will be held at the end of September on home ice in Oberstdorf. Both are also excited about being selected for the ISU Grand Prix of Figure Skating Skate America. It will be the second ISU Grand Prix of their career. In 2021 they went to Grenoble in France, but a fall in the Rhythm Dance cost them dearly.

“We are really happy about the Grand Prix and we want to fix the mistake that we made (last year),” Janse van Rensburg noted. “The first time was nerve-wracking, but we’ve tasted blood and we are extremely pleased (to have been assigned to a Grand Prix).”

Since their main rivals Müller and Dieck split up at the end of the season, Janse van Rensburg and Steffan are currently the number one German ice dance team as the others in the country are less experienced or still new.

“Our goal for the season is to defend our National title and to finally compete at the major championships,” Janse van Rensburg said.

At the end of the season, the team sat down to review their long-term plans and decided that they would continue until the 2026 Olympic Winter Games.

“Well, at Nationals they said that I’m one of the older skaters, and I’m not denying that,” said Janse van Rensburg, who turned 29 in May. “But to get to age 32 at the Olympics will be good! We got close and we keep going.”