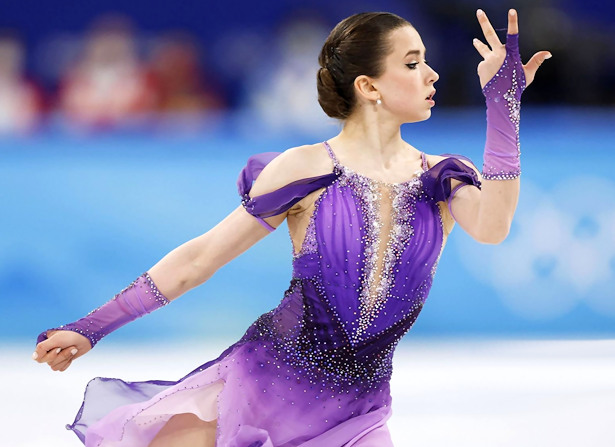 The Women’s Figure Skating event at the 2022 Olympics kicked off with the Short Program on February 15, 2022, at the Capital Indoor Stadium in the Haidian District of Beijing. Kamila Valieva (ROC), who debuted as a senior internationally earlier this season, is currently in the lead, followed closely by teammate Anna Shcherbakova and Japan’s Kaori Sakamoto.

The Court of Arbitration for Sport (CAS) held a hearing on Sunday which lasted over six hours regarding the controversial doping matter for Valieva. The CAS Ad Hoc Division overruled the preliminary objections from three organizations, resulting in allowing the athlete to compete.

Valieva gave a subdued performance to “In Memoriam” by Kirill Richter, opening with a triple Axel in which she stepped out and put a hand down, but fought back to land a solid triple flip and triple Lutz-triple toe. All three spins and footwork were graded a level four and received many high grades of execution (GOE). The 2022 European Champion finished first with 82.16 points.

“From the first element, I really controlled each gesture, each movement, jump, turn,” said the 17-year-old. “I understood that I am skating at an Olympic Games and I wanted to do this skate to the best of my abilities, so I am very happy that I was able to accomplish that.”

Skating to music from the Gladiator soundtrack, Sakamoto delivered a nailed a double Axel, triple Lutz and triple flip-triple toe. All spins and footwork were graded a level four with positive GOEs, and the 2021-22 Japanese National Champion scored a new personal best of 79.84 to finish third.

“I am actually quite satisfied!” said Sakamoto. “I am very happy. Actually, not long ago, I chatted with my coach and choreographer online to talk about how to adjust the details of my program and how to get a better score. I think that paid off. I’m very happy about it.”

“When I competed in my first Olympic Games, I was just 17,” she recalled. “I was not that experienced. I went through a lot of ups and downs in these four years and I really want to deliver a good performance on the stage of the Olympics.”

Alexandra Trusova (ROC) underrotated and fell on an attempted triple Axel and received an edge call on the triple flip in her routine to music from Frida. However, the triple Lutz-triple toe was clean and all footwork and spins were graded a level four. The 17-year-old scored 74.60 points for fourth place.

“This time I almost wasn’t nervous at all,” said the 2021 World bronze medalist of the triple Axel. “It was a long-awaited performance. Usually I am nervous and I can’t do it and I feel that I can’t do it, but this time I was absolutely prepared for everything. After I fell on the axel, everything else I did with ease. I didn’t think about anything else. I was trying to get into character.”

Skating to “Your Song” by Ellie Goulding, Japan’s Wakaba Higuchi landed a triple Axel, but the back end of the triple Lutz-triple toe was underrotated and the triple flip received an edge call. The 2018 World silver medalist placed fifth (73.51).

“I am actually quite satisfied with my triple Axel, but I think it was a pity because one of the jumps got downgraded,” Higuchi noted. “The score was not as high as I expected, and I think that is the only pity I had for this performance. In general I am still quite happy with this performance, but the score was actually lower than the team events. So that is what I’m feeling not happy about.”

Young You of South Korea underrotated a triple Axel and also received an edge call on the triple flip in her routine to “Whirling Winds.” However, the 2020 Four Continents silver medalist landed a clean triple Lutz-triple toe for sixth place (70.34).

“I feel my skating today was OK,” said You, who admitted to being nervous when she woke up in the morning. “Things were not perfectly done, but I think overall it’s good.”

Belgium’s Loena Hendrickx opened with a triple Lutz-triple toe, but fought for the landing of her jumps. She put a hand down on a double Axel and receiving an edge call for the triple flip. The four-time national champion is in seventh place with 70.09 points.

“I’m not satisfied,” said Hendrickx. “All the training has been going perfect. I didn’t miss a jump, so I was calm. I think I had a little adrenaline and 70 points is still ok.”

USA’s Alysa Liu finished eighth (69.50). The skater, who won both challenger events this season,  showed good energy in her routine to “Gypsy Dance” from Don Quixote, but the flip received an edge call and the back end of the triple Lutz-triple toe was slightly underrotated.

“I am really happy,” said Liu. “I just can’t believe I actually did a clean short program today, because I’ve trained so much. I’m just really glad that all my training paid off, because I’m here competing. And the goal of my whole life and my skating career was to compete at the Olympics, so now I can officially say I’m an ‘Olympian.’”