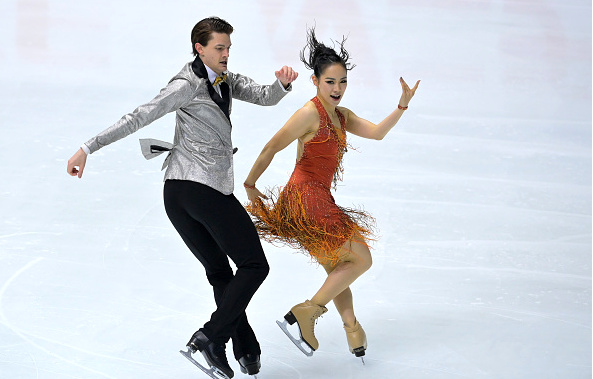 Two-time and current Japanese National champions Misato Komatsubara and Tim Koleto danced to the lead in the Rhythm Dance at 2020 NHK Trophy on Friday. Kana Muramoto and Daisuke Takahashi finished second after their long-awaited debut in competition, followed by Rikako Fukase and Eichu Cho, who are also making their Grand Prix debut.

Due to the ongoing COVID-19 pandemic and travel restrictions, the ISU Grand Prix of Figure Skating events are primarily domestically run events with domestic skaters and skaters who train in the host country or respective geographical region.

Komatsubara and Koleto showed level 4 twizzles and a curve lift in their dance to music from the Dreamgirls soundtrack, hitting three out of four of their keypoints in the level 3 Finnsteps. The husband-and-wife team also showed level 3 pattern steps and scored 70.76 points.

“This year has been such a tough situation for everyone and I know that everybody has been working very hard,” said Koleto. “This competition, we were able to perform to a (live) audience and we are very lucky. It has been only a week since I obtained Japanese citizenship and it was great to share this moment with the Japanese audience.”

Muramoto and Takahashi were well-received by the crowd with their entertaining routine to music from The Mask. After competing in the Men’s division for nearly 20 years, Takahashi is now trying his hand at ice dance. The new team earned a level 4 for their rotational lift, while the twizzles were graded a level 3. While it’s clear that there is a lot of room for growth and improvement, the team still scored a respectable 64.15 points in their first time out.

“It is very special to perform for a live audience,” said 34-year-old Takahashi. “Not everything was the way we hoped and it was not a 100 percent, but the Rhythm Dance was good. I did not realize how difficult ice dance is. So hats off to all ice dancers!”

“It was a very special moment because in the world because a lot of the Grand Prixes got canceled,” noted Muramoto. “In our first debut as a team, we got to skate in front of a Japanese audience and that was very special.”

Fukase and Cho are close behind with 63.46 points after their engaging routine to music from La La Land which featured level 4 twizzles and rotational lift.

“We had a lot of challenges to overcome,” said Fukase. “Coming to Japan, we first had to practice under quarantine conditions. This is the first time we scored above 60 in the Rhythm Dance and we are very happy!”