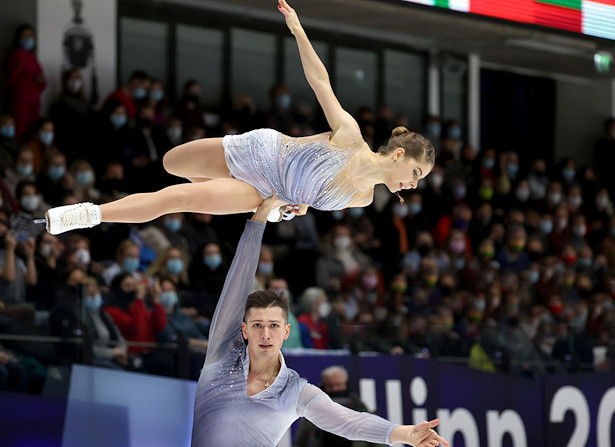 Anastasia Mishina and Aleksandr Galliamov led the Pairs in a Russian sweep at the 2022 European Figure Skating Championships on Thursday in their debut at this event. Veterans Evgenia Tarasova and Vladimir Morozov won their seventh European medal—the silver, while Aleksandra Boikova and Dmitrii Kozlovskii earned their second bronze.

Overnight leaders Mishina and Galliamov delivered a technically difficult, yet confident performance of their program to “Snow Storm” and “Time Forward” which featured side-by-side triple Salchow-Euler-triple Salchows, a triple twist, throw triple flip, side-by-side triple toes, and a throw triple loop. All lifts were graded a level four and most of their elements were rewarded with many positive grades of execution (GOE). The defending champions earned a new personal best and record score in both the free skate (157.46) and overall score (239.82).

“We don’t really pay attention to the scores and haven’t even seen the protocols, but this isn’t the best we can do,” said Mishina. “We can still do better than that. Today, it was more difficult to skate, maybe because it was late so it made us a bit nervous, but we are happy about our skating today.”

Mishina said she always listens to the scores of competitors, but not intentionally. “It happens that way, and so I knew that if we skated clean the result would come. The preparation was a bit different today. I went out today really calm, too calm, and because of that, I started to get nervous!”

“We skated well and we were able to overcome all problems that we encountered here and in practice,” Galliamov added. “I am not feeling too great, I was cold in my room, but that does not play any role and does not stop us to skate at the highest level. It does not matter if you feel sick or not, you need to go out and just do it.”

Skating to “Lighthouse” by Patrick Watson, Tarasova and Morozov laid down a near-perfect program. Tarasova stepped out of the opening triple Salchows, but the rest of the routine was clean and the two-time world silver medalists racked up many positive GOEs with their level-four lifts and spin. The team also landed side-by-side triple toe-double toe-double toes, and the throw triple flip and throw triple loop were excellent.

“I think she was so excited that she overrotated, but then she calmed down and decided to concentrate,” said Morozov of Tarasova’s error on the triple Salchow. “From that moment on, it was easier,” she chimed in.

“Tonight we were skating for ourselves and we felt confident,” said Morozov. “It wasn’t the best and we could do more, but for today, it was good. We skated probably for our own pleasure once all the elements were over. We know that the other teams skated well before us, but we didn’t watch, we focused on ourselves and our program. We loved skating in Tallinn, the great venue, and the audience was great!”

Boikova and Kozlovskii, who stood in third going into the free skate, gave a compelling performance to “Malaguena” featuring side-by-side triple Salchows and triple to-double toe-double loops. The 2021 World bronze medalists also showed a very good level-four triple twist, throw triple flip, and throw triple loop and earned a level 4 on all the lifts and spin. Nearly every element was awarded high GOEs and the team placed third in the free skate (150.97) and overall (227.23).

“We are happy that we were able to overcome ourselves today,” Kozlovskii reflected. “We were pleased we were able to come back to do the task after yesterday. Anything happens, and we all remember how an Australian won the Olympics in short track. Accidents happen and they also happen for the worse, like what happened yesterday.”

“The most important thing is that despite the frustration and inner dissatisfaction we felt yesterday, we managed to put all the emotions aside and put together a clean, decent skate today,” he summed up. “Today we are satisfied with ourselves. A small mistake did not affect the scores and the level of presentation of our program in any way.”

“Sometimes accidents happen for the better,” Boikova added. “Maybe, on the contrary, this mistake helped us to concentrate more on today’s work.”

“To do all the elements is my job, so no,” she responded when asked if successful jumps gave her confidence. “Of course, when you skate the program, you concentrate on doing element after element, but I can’t say that it gives you confidence somehow. You just go, and when you have done an element, you understand that you have passed this part of the program, so, well done, and you go on.”

“We are overwhelmed!” said Safina. “I was so scared! So scared that I would not be able to do what I should. Even the things that didn’t work at all during the practices and the warm up worked. The triple Salchow I was failing it every time I tried and then at the competition, I landed it! I proved that I can land it!”

“We have some questions about the elements,” said Berulava. “The death spiral is level one and we were aiming for level four, so we don’t understand what we have to do to make it level four. I wish we could have asked the judges. I was a bit tired by the end of the program, but we pulled the elements off.”

The team, who medaled at both Junior Grand Prix events and placed third at Nebelhorn earlier this season, will now focus on Junior Worlds.

“Next season we will include the Junior Grand Prix and the B competitions,” Safina offered. “We get prepared for each competition and we prepare our program that we are to skate so it’s not confusing to do juniors or seniors.”

Italy’s Rebecca Ghilardi and Filippo Ambrosini showed good level-four lifts and a throw triple Lutz in their routine to “Grande Amore” to place fifth overall (178.90). The team filled in for national champs Nicole Della Monica and Matteo Guarise who didn’t compete for precautionary measures following a fall in training.

“This was the first time for us to skate the  free program with the leading pairs and we felt very emotional,” said Ghilardi. “It was emotional and hard.”

“When we started skating together five years ago, we admired the Russians (Tarasova and Morozov), but now, step by step we were able to compete in the final group with them,” said Ambrosini.

The 2021 Lombardia Trophy bronze medalists will go back to Bergamo to train for two weeks before departing for Beijing on January 29th.

Sara Conti and Niccolo Macii of Italy finished a respectable seventh overall (168.90) in their debut at this event, followed closely by Germany’s Minerva Fabienne Hase and Nolan Seegert (168.75) and Laura Barquero and Marco Zandron (168.40) of Spain.