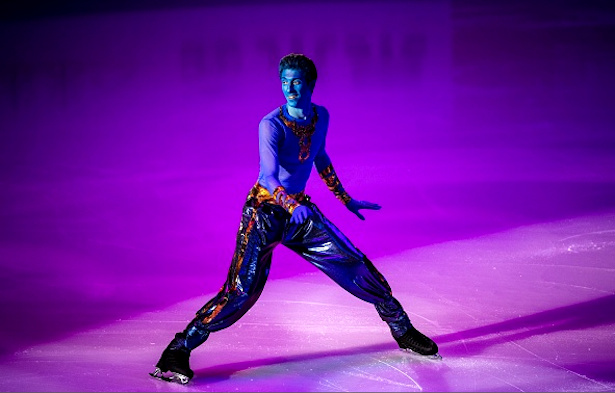 Morisi Kvitelashvili of Georgia performs during the Exhibition Gala at the 2020 Rostelecom Cup in Moscow, Russia.

Last month, Morisi Kvitelashvili of Georgia claimed the silver medal at the 2020 ISU Grand Prix of Figure Skating event Rostelecom Cup in Moscow. It was his second Grand Prix medal as well as the second medal for Georgia in any discipline on the senior Grand Prix circuit. Rostelecom was Kvitelashvili’s first, and so far, only competition this season as the ISU Grand Prix Final and the ISU European Figure Skating Championships have been cancelled. As a result, the skater is not sure what will happen next, however, the reigning European bronze medalist is determined not to let that get him down.

“We prepared a long time for the Grand Prix due to the current situation in the World,” Kvitelashvili said about Rostelecom Cup where he won the Short Program and then finished second behind Russia’s Mikhail Kolyada in the overall standings. “I did not have any other competitions. I am glad that I was able to prepare well and to perform well. “Obviously, I am happy with my result and that I was able to present myself in a good way.”

Originally, the Georgian had planned to attend the Minsk Ice Star in Belarus at the end of October, but that plan fell through as there were problems with tickets.

“Flights were cancelled and it was very difficult to decide how to get there,” the skater explained. “Plus, the situation in the country itself is not very safe. We realized that it was better to stay home and to train and to prepare for the Grand Prix Rostelecom.”

Kvitelashvili said that he and his coaching team of Eteri Tutberidze, Daniil Gleikhengauz and Sergei Dudakov did not even think about asking the Russian Figure Skating Federation whether he could take part non-competitively in one of the national Russian Cup series events.

“We were just training calmly and we were working,” said the 25-year-old. “A lot of work has been done. Of course, I really missed competing and I wanted to compete and show my new programs. It is good that I got the opportunity and that the competition took place while some other Grand Prix events were cancelled.”

“I listened to it on the phone and I got goosebumps right away!” said Kvitelashvili, adding that he read the translation of the French lyrics to understand the meaning of the song. “It impressed me how Jacques Brel brought across the power of this music with his voice. I agreed right away to do this short program.”

“It is about the life of the sailors in Amsterdam,” the skater elaborated. “The sailors were always known as travelers and for adventures, people that had business in Amsterdam and fun. I liked the music and the character and we decided to show all this on the ice.”

The skater had actually visited the city of Amsterdam in the past when he went to The Hague for a competition in 2017 and has fond memories of it.

It was coach Tutberidze who suggested Giacomo Puccini’s Tosca for the Free Skate.

“Each choreographer has to speak his library of characters and compositions that he would like to realize,” said Tutberidze, adding that Tosca is a ‘male composition.’ “So Tosca was on my list of compositions that I wanted to put on to the ice.”

“She said that for a long time she wanted one of her skaters to skate to this,” Kvitelashvili agreed. “She thought for whom to make a program and decided to do it for me. Moreover, I didn’t have this kind of serious program yet. I think that it is on a completely different level and you need to be able to skate to that and to show it. I watched the opera and I even read the libretto. I tried to delve into the character.”

While these programs were well received, Kvitelashvili’s exhibition program at Rostelecom to “Aladdin” in which he appeared as a blue genie, complete with makeup, really stole the show. The skater had already thought about using this character during the summer, and later, his coaches had the same idea.

“I’ve watched the movie Aladdin many times. I knew the music, the movie, the cartoon, the character and I just had the idea it would be nice to do this kind of fun and interesting program,” Kvitelashvili shared.

Once they decided to go with this program, everything fell into place very fast. The coaches tasked the skater with finding a lamp and makeup.

“We did it within three days!” the European bronze medalist recalled. “In two or three days, we also did the costume. It was just a great atmosphere. It was interesting and everyone was watching and many jokes were flying around about how to do it. It was a very creative process on the ice. Daniil suggested something, I had some input and showed some things, and so we put it together.”

The skater revealed that the makeup takes nearly an hour to apply and more than an hour to remove.

Kvitelashvili would have loved to have performed this exhibition number at Europeans, and now, it is not clear when or if there will be another competition this season. He also had hoped for the Grand Prix Final to happen and thought he could have been invited based on his result from Rostelecom Cup. Like skaters all over the World, the Georgian was disappointed to learn that these events had been cancelled.

“Obviously, an athlete first of all should compete in order to develop further,” remarked the skater. “It is also very difficult to keep yourself in the training regimen. When there are no competitions, you don’t know where you are going. You don’t know how to proceed. You don’t know what you are doing this for. You are in good shape, but you cannot show it anywhere.”

Nevertheless, Kvitelashvili is trying not to let these circumstances affect him too much.

“I just realize that it does not depend on me and I try to keep calm and carry on, continue to work, and not to think about it and not to give up,” he summed up. “So for now, my plan is to continue training and working and wait for competitions that will take place.”