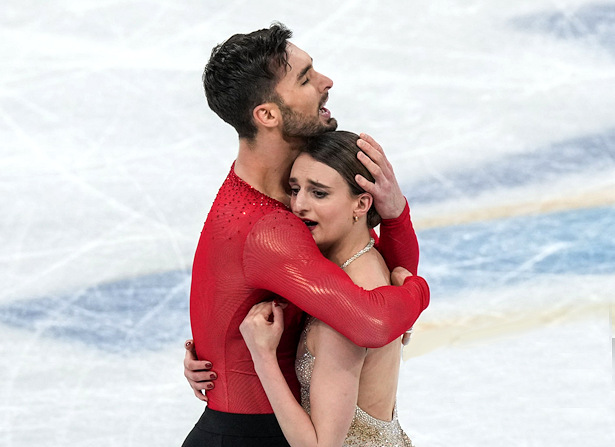 Gabriella Papadakis and Guillaume Cizeron of France perform during the Free Dance on day ten of the Beijing 2022 Winter Olympic Games at Capital Indoor Stadium on February 14, 2022.

The Ice Dance event for the 2022 Winter Olympics concluded with the Free Dance on February 14, 2022, at the Capital Indoor Stadium in the Haidian District of Beijing. Defending silver medalists Gabriella Papadakis and Guillaume Cizeron of France claimed the gold, while Victoria Sinitsina and Nikita Katsalapov (ROC) and USA’s Madison Hubbell and Zachary Donohue, earned the silver and bronze, respectively.

Papadakis and Cizeron showed intricate footwork and beautiful lifts in their “Elegie” program. The four-time World Champions picked up a level four for the twizzles, dance spin, and two lifts. The team earned a level three on the diagonal steps as well as a rare level-three on the rotational lift. Nevertheless, all elements received no less than +4 grades of execution (GOEs) and they finished first in the Free Dance (136.15)  and overall (226.98).

“We never were so stressed, but each second of the program felt perfect,” said Cizeron shared. “Above all, we wanted to have a good experience here, to have joy and have the Olympic moments that we have been dreaming of. The silver four years ago made us to want the gold medal more than anything else. I think we’ve never worked that hard for a specific goal throughout our career. All the gold medals came one after the other without us really wanting them as a precise goal. This year we gathered the courage actually to want to win. That was a pretty important shift.”

“I think we don’t believe it yet!” said Papadakis. “Honestly, it feels completely unreal. We have been waiting for this. This is the medal that we wanted. My brain doesn’t understand it!”

“Honestly, I don’t remember much,” laughed Cizeron regarding their performance. “I don’t know, it’s like time stops. You kind of get through it and then it’s over. We just relied on our trust and we borrowed energy from of all of our teammates and coaches. It’s memories, it’s eye contact that I will never forget.”

Sinitsina and Katsalapov produced excellent level-four twizzles and lifts in their effortless, yet technically difficult routine to Sergei Rachmaninov’s “Second Piano Concerto” and “Variations on a Theme of Paganini.” The 2021 World Champions also earned many high GOEs in all elements, including the strong level-three midline and one-foot steps. They finished second (131.66) in the Free Dance and overall (220.51) in their debut at this event.

Katsalapov was shocked at winning the silver. “I couldn’t believe it!” he said. “I was just so hungry, so focused. I feel like I brought forward all of my best qualities to make this performance as successful as it was. I am very glad it happened as it did and that we skated to an Olympic medal.”

“It was for sure the best Free Dance of the season,” he added. “We went out fearless, we attacked our program. Obviously, we came here to fight for the highest placement, but it was a fair competition and we are pleased with our result. This time it is silver, next time maybe gold.”

“This means everything,” added Sinitsina, “This  is every athlete’s dream, it’s something they work all their lives for. I am very proud of Nikita and myself for achieving this result.”

Katsalapov said that the medal definitely gives them confidence moving forward into future competitions, but for now, they just want to “live in the moment a bit longer.”

Despite a one-point deduction on an extended lift, Hubbell and Donohue still put down a magical performance to “Drowning” to score a new personal best of 130.89 for third place in the Free Dance. The 2021 World silver medalists produced very good level-four twizzles as well as solid level three circular and one-steps. All lifts were graded a level four, and with a total score of 218.02, the team was able to maintain third place overall in their second appearance at this event.

“We are pleased with the performance,” said Hubbell commented. “We didn’t feel like we left anything undone. We’re extremely proud, grateful and really excited to stand on the medal stand tonight. It’s such a privilege to be here. That’s something that we’ve worked on a lot, we see this as a privilege. When I finished, I just was grateful for being here.”

“I have always been told since I was a little girl that my journey through skating should always been about the days and the moments, not just the accolades,” said Hubbell. “I think this medal only came because we really took that to heart in the last four years. We tried to skate like normal, like we do every day in practice and trusted that would be enough. And it was, so we couldn’t be more grateful!”

“Everybody in that last group, we were all so tight to each other,” she added, regarding the close scores going into the Free Dance. “A mistake could screw up the plan. So we were all quite tense, but it’s a testament to how we push each other to continue to improve.”

“It was a really emotional performance for us,” said Donohue. “It took a lot focus, drive and it just hasn’t really sunk in yet. Standing on an Olympic podium is absolutely a mix of pride, joy, elation, relief, and all the stress that’s been building up for an entire season.”

USA’s Madison Chock and Evan Bates put out a spellbinding “alien and astronaut” routine to music by Daft Punk. The the three-time national champions earned many GOEs for all elements, and all three lifts, twizzles, and spin were graded a level four. The one-foot and diagonal steps were solid, scoring a level three, and the team finished fourth with a new personal best of 130.63 in the Free Dance and overall (214.77) in their second appearance at this event.

“Right now I think all the adrenaline is leaving my body,” said Chock. “I’m starting to feel drained and tired, but it was so exhilarating to perform today and to finish our Olympic experience off with that performance. And I’m just really proud of Evan and how we trusted ourselves and did the work. “We’re very pleased and to go home knowing that we did two solid performances is a good feeling.”

“We really wanted to be on the podium,” admitted Bates. “I think the fourth place sometimes can be one of the hardest places to finish. But the fact that there are only three spots on the podium is what makes this sport so furious and so loved by so many people and the fans at home and the athletes too. We want the competition to be strong and deep, and that’s exactly what it is.”

Charlene Guignard and Marco Fabbri of Italy were smooth in their routine to music from Atonement which featured level four twizzles, lifts, and spin. The 2021 European bronze medalists finished fifth in the Free Dance with 124.37 points and rose from seventh to fifth overall (207.05).

“It was not a perfect performance,” said Fabbri. “We could have done some things a little bit better, but we’re still very proud about our performance.”

“It’s not been an easy Olympic Games because it’s been very long,” he added. “We’ve been here for so many days. We skated so many practices with judges watching, but we will go home after a very great experience, very strong emotions.”

“It’s hard for us now to say (whether) we will continue until the next Olympic Games,” said Fabbri, when asked. “But having an Olympic Games in Milan, Italy, which is my home town, and where Charlene has been living for more than 10 years, is inviting. It will be something that will push us and make us reflect a lot more.”

Alexandra Stepanova and Ivan Bukin (ROC) showed solid level-four twizzles and lifts, however, the team had a slight foot slip on the choreo slide which received negative GOEs. The 2021 European silver medalists finished eighth in the Free Dance (120.98), but with a total score of 205.07, slipped on place to sixth overall.

“If you are a professional athlete, if you make a mistake, you need to prove that even after a mistake, you can skate bigger and better,” said Stepanova of the error. “If you do this, you’ll get the result.”

“We were a bit more nervous today,” admitted Bukin, comparing their performance to the Rhythm Dance. “We did almost all of our elements, the ice was good. We love this program. It’s a good story that resonates with so many people. It is a difficult program and we work hard to showcase it.”

“Today wasn’t the skate that we wanted,” admitted Gilles. “It’s definitely hard, and obviously we haven’t had a chance to really figure out how we’re going to overcome it. But I think more than anything, we got off the ice and despite not having the skate we wanted, we felt really united. We felt like we had done it together and I think ultimately, that’s what’s going to allow us to keep moving forward once we get back home from the Games and move on to the next thing.”

“We’ve been able to have a really great time,” added Poirier. “We’ve so enjoyed just having so many people around that are so supportive and welcoming. I think that’s really created a good energy and spirit in the village.”