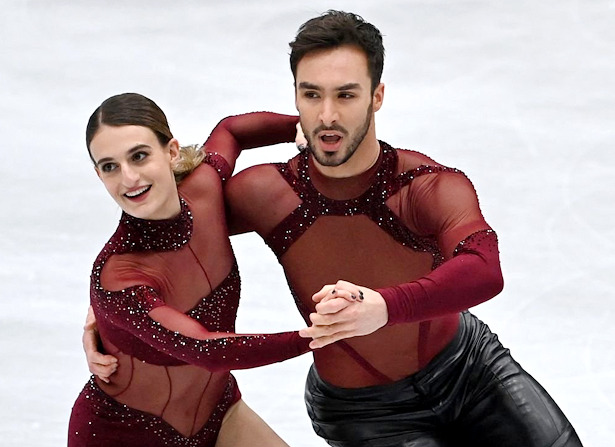 Fresh off their Olympic victory, France’s Gabriella Papadakis and Guillaume Cizeron are currently in first place after the Rhythm Dance took place on Friday at the 2022 World Figure Skating Championships. USA’s Madison Hubbell and Zachary Donohue trail the leaders by just a few points, followed by teammates Madison Chock and Evan Bates.

Papadakis and Cizeron produced incredible level-four twizzles in their engaging routine to “Made to Love” which was highlight throughout with intricate hand and arm moves. The 2022 Olympic Champions racked up many high grades of execution (GOE) in all elements, including the level-four stationary lift and Midnight Blues steps (in which all key points were met). In the end, they earned a new record Rhythm Dance score of 92.73 points.

“I think it was better than at the (Olympic) Games,” said Cizeron. “We were a little bit more relaxed, so I think it appeared in our skating, and then the judges change also, you know, there is a variation there. Overall, I think we’re just getting better and better, which is a good sign.”

“It was definitely easier (to perform here),” said Papadakis. “There was a little bit of pressure that we did have because of the audience, but at the same time, it was wonderful and was lifting us too. It was very different, but definitely easier.”

Hubbell and Donohue met all key points in their level-four Midnight Blues steps, and the stationary lift and twizzles were also graded a level-four in their entertaining “Janet Jackson” routine. While the midline steps were graded a level two, they earned many high GOEs for that element, as well as all other elements, to score a new personal best of 89.72 points.

“Zach and I were very pleased,” said Hubbell. “It’s an arena with a lot of energy and it was really fun to perform. We have so many of our coaches here – all seven of them and friends in the stands. We had the goal of staying focused, but really letting the moment sink in a little bit more than at the Olympics. I had quite a fun moment, I was really just celebrating.”

When asked about their last Free Dance for tomorrow, Donohue said: “Gosh, how is Madi going to keep her emotions? I don’t know. I think being that this will be our last competitive performance. We’re just staying in the moment because we want to take everything in. We’re going to enjoy every second and make the most of it.”

Chock and Bates produced very good level-four twizzles and a curve lift in their routine to selections by Billie Eilish. The two-time Four Continents champions also displayed level-three Midnight Blues steps and midline steps, with all elements receive high GOEs. They sit in third with a new personal best of 87.51 points.

“We had a ton of fun out there performing,” said Chock. “We really performed every second of this program and the crowd was so enthusiastic, so it made it even more fun and easier to let loose and just let the program shine. It feels great to have sent this program off with a wonderful performance. Our best performance of the season by far, and so it’s really nice to close off our Billie Eilish number on that note.”

“I think we want to win a medal,” said Bates of their goals for the Free Dance. “We want to be on the podium and Worlds, and it’s definitely a big goal of ours, and we want to close this season with a really strong performance. And you know these days we don’t always have an audience.”

Charlene Guignard and Marco Fabbri of Italy delivered excellent level-four twizzles and Midnight Blues steps in which all four key points were met, however, the midline steps were only graded a level one. The straightline lift was also graded a level four and the 2022 European bronze medalists finished in fourth place with a new season’s best of 84.22 after their engaging “Michael Jackson” routine.

“We’re very happy because we wanted to improve the score from what we got at the Olympics,” said Fabbri. “Today we made it even though we got level one in the midline step sequences, so we lost quite a lot of points there. That’s basically our goal. We don’t like to go to a competition and think ‘ok we want to be 1st, 2nd, 3rd…’ We.re not thinking about the placement. We just want to improve the scores.”

The team is planning on competing next season and will then evaluate their results, physical and mental condition.

“We’ll do it season by season,” said Fabbri. “Of course there’s a big motivation for us, which is the Olympics Games in Milan – our hometown. So for sure we will consider very well when we will retire, but for now we’re not thinking about retirement. We are already looking for new music. We’re searching for new elements.”

Performing to music by Elton John, Canada’s Piper Gilles and Paul Poirier showed good level-four twizzles and rotational lift. The Midnight Blues steps were graded a level three with three key points met, however, there was as separation of hold on the pattern steps which were graded a level two. The current World bronze medalists finished fifth with 80.79 points.

“It was so nice to skate in front of an audience again, to perform for people again,” said Poirier. “And we were really able to enjoy that bit of it. We are a little bit disappointed with the score and I do think there were a few mistakes that we did make, but I think we are just going to look forward to having another nice performance tomorrow for the audience.”

“I think we are very comfortable skating the free dance normally,” said Gilles. “It’s something that we really do enjoy performing. And I think trying to redeem ourselves from the Olympics will light a fire underneath us to be able to skate a program that we know we can do. I think we just have to turn the page and look forward to performing in front of people. I think we just have to keep our head held high and skate a program that we just love to do and hit all our levels and stay present at every moment of the program and hopefully that will get us where we need to be.”

Olivia Smart and Adrian Diaz of Spain finished earned a new personal best of 79.40 for sixth place. The 2021 Skate Canada bronze medalist delivered an fun and energetic routine to Tina Turner’s “Proud Mary” which was highlighted by level-four twizzles and straight-line lift, as well as good level-three pattern steps.

“We are very, very happy with the rhythm dance,” said Smart. “We had a goal – 80 points in the rhythm dance. We’re just off that, but we took our season’s best and we are very happy to be here, to compete that program in front of the crowd again. It was very very fun!”

Great Britain’s Lilah Fear and Lewis Gibson are in a close seventh (78.89), followed by Laurence Fournier-Beaudry and Nikolaj Sorensen (78.29) of Canada and USA’s Kaitlin Hawayek and Jean-Luc Baker (76.56). 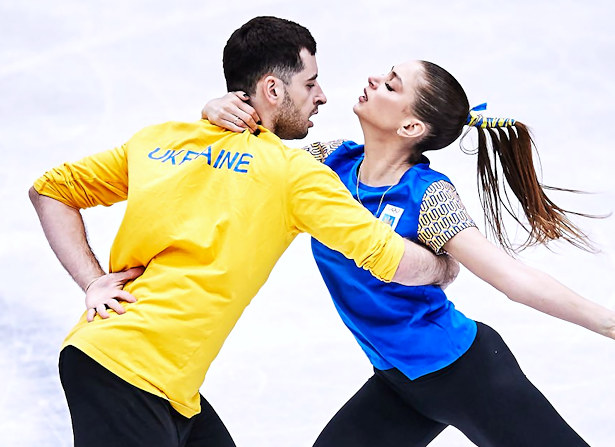 Ukraine’s Oleksandra Nazarova and Maksym Nikitin, who are in 16th place, donned yellow and blue shirts for their new Rhythm Dance to “1944” by Jamala.

“For us it is so important to tell the whole world what is happening right now in Ukraine,” said Nazarova. “Of course it’s a competition, but for us, it’s not just a competition for us—it is something bigger, especially for Maksym.”

“We saw the tanks, heard the shooting, my house doesn’t have windows anymore,” she added of their home town of Kharkiv. “It’s horrible running to the shelter holding a kid in your arms and I will not wish to anyone to live through it. We traveled to Poland, it took days. I left earlier, I could not bring my skates, but Maksym took them for me. Thank you to the people in Poland, in Torun, the Club Axel, Sylwia Nowak and (fellow ice dancers) Natalia Kaliszek and Maksym Spodyriev. They welcomed us like family and we feel an enormous support.”

“The bigger point is to tell the truth about what is happening in Ukraine and I hope this will help people in Ukraine who are now not safe, they are still in danger and lose their houses,” added Nikitin. “I hope we can help all people in the world to understand what really happens, because we saw it. Just six days ago we were in Ukraine. I was in Kharkiv and our whole families are still in Ukraine. We saw what they (Russian army) are doing, how they work and it’s disgusting.

“The music is Ukrainian, by our famous Ukrainian singer Jamala who won the Eurovision song contest,” Nikitin explained of the new Rhythm Dance. “The song ‘1944’ was written by her. The first part is a call for the whole world and telling them and warning them. One month and a day ago, no one could believe someone can attack in the 21st century a country, and it happened.”

“We were fortunate enough to be in the building when they skated,” said Bates of their former training mates. “We watched them live and we’ve never been so moved by a performance. I think the world has seen the bravery of the Ukrainian people, and we also have the bravery of Sasha and Max today, they are being here, taking the ice wearing their Ukrainian shirts to escape the way that they did. I mean, it was hard to compose ourselves to skate because we were just so moved by what they did and I’m proud to know them.”

The Ice Dance event will conclude tomorrow with the Free Dance.