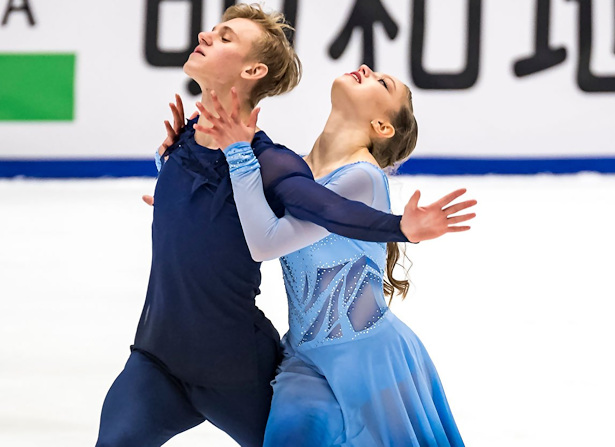 Mariia Pinchuk and Mykyta Pogorielov of Ukraine perform during the ISU Junior Grand Prix of Figure Skating at Oliva Hall on October 02, 2021 in Gdansk, Poland.

Editor’s note: On February 24, 2022, approximately 150,000 of Russia’s “peace-keeping” troops and tanks spilled over the borders of Ukraine, violating the territorial integrity and sovereignty of the country in what President Vladimir Putin claimed was a “special military operation.” Missiles and airstrikes struck across the country, including the capital Kyiv, and a large ground invasion followed from multiple directions.

Ukraine enacted martial law — the temporary substitution of military authority for civilian rule — and initiated a general mobilization of all male Ukrainian citizens between 18 and 60. Males that fell into that age category were barred from leaving the country unless documents and/or permission to do so was granted by the Ukrainian government.

Most of the civilian casualties recorded were caused by the use of explosive weapons with a wide impact area, including shelling from heavy artillery and multiple launch rocket systems, and missile and air strikes. Since the onset of the Russian invasion, nearly one-third of Ukrainians have been forced from their homes. In addition, 15.7 million people are estimated to urgently require humanitarian assistance and protection.

Junior ice dancers Mariia Pinchuk and Mykyta Pogorielov were training and preparing for their debut at the 2022 World Junior Figure Skating championships when they “woke up to the worst alarm clock in the world.”

“It was volleys, explosions, and pain,” said Pogorielov. “It was awful! Words are superfluous here. When people come to you to take away your home, to destroy the nation and say to you, ‘we save you’… this is not the behavior of a healthy person. It is not even animalism. There are no words to describe this madness.”

Pogorielov and his family made the decision to leave their home, however, he couldn’t depart right away due to the mobilization. The skater waited two weeks for documents and permission to leave before relocating to Vienna.

“The big test was leaving Kharkiv,” he said. “After spending a week in a bomb shelter, under constant shelling, it was scary to go outside. But after our square was blown up, we could no longer stay; we had to go further from the front. The picture was on the horizon…it was horrible. Through the streets of our hometown stood tanks, our heroes (defenders) and lined up enemy equipment.”

I was at home during the attack on Ukraine. It all started at about 5 o’clock in the morning. At first I didn’t understand what had happened and I still wanted to sleep, because I had to train in the morning.  But then my parents told me to pack my bags to go to the village.

When Pogorielov finally left with his family, they headed to the western part of the country. However, travel was difficult as there were many checkpoints and heavy traffic.

“The whole country was fleeing the violence that ruined our lives,” said  Pogorielov. “We had been driving for about three to four days and stopped for the night in hostels. It was impossible to pave the whole route because the situation was constantly changing. At the checkpoints, we were advised in which direction it is safer to go. So we arrived in Yaremche, a small mountain town near the resort area Bukavel. We were sheltered by a wonderful volunteer family, real ‘Hutsuls’. In fact, we liked it there and we promised ourselves that when everything is over, we will definitely go to visit them, with a calm heart and with great gratitude! Already we started to get documents to leave the country, at that time we did not know which country we would go to.”

When the first documents came through for departure, Pogorielov went to customs in Ustilug.

“The documents were made incorrectly,” he said. “From the first time, we failed to pass. We still had to wait. For about a week, Maria and her parents lived in a small hotel near Chervonohrad. We decided to go to old relatives, near Lviv, where one night not far from us bombed polygons. It was in Yavoriv. Over time, another version of the document came. We left. Unfortunately, Maria’s father remained in the country.”

His father, brother, and pets were able to find refuge in Spain, however, his grandparents are still in Ukraine. His mother later joined his father and brother in Spain.

“My mother went with me,” said Pinchuk, adding that they also took their cat. “We traveled by car, from the place where we were waiting for the documents. It took one day, since this place was right next to the border, and from the Kharkiv region to this place we drove four days. There were many roadblocks, checks for documents, and a curfew during which it was undesirable to drive on the road. Along the way we met a lot of tanks and military equipment, it was scary.”

“We arrived in Vienna the second half of March,” she said. “Unfortunately, my father, sister, and grandparents are still in Ukraine. My sister had to move to central Ukraine. She lived in the center of Kharkiv which was bombed a lot and continues to be bombed every day.”

The team is grateful to the Austrian figure Skating Federation for providing training ice and facilities.

“My family is still trying to find any work,” said Pogorielov. “It’s so hard because they need a European license to work in design/architecture. I also hope to work soon when things stabilize more. Now I am studying online with the Kharkiv School of Architecture.”

“At the moment we don’t know how long we’ll be here,” said Pinchuk, adding that one of their coaches (Galina Churilova) is with them while the other (Mariana Kozlova) is still in Ukraine.

The young skaters had made their Junior Grand Prix debut earlier this season in Slovakia and Poland before winning medals at the junior level at the 2021 Victor Petrenko Cup (silver), 2021 Open d’Andorra (gold), and the Santa Claus Cup (silver). They are currently preparing two new programs for the upcoming season.

“We will be doing an Argentine Tango and Flamenco for the Rhythm Dance,” said Pinchuk, adding that they are keeping the music under wraps for now.

“It’s so exciting about the new free dance,” said Pogorielov. “It’s a fun piece from a soundtrack and is a new style for us. Oleksandra Nazarova and Maksym Nikitin sent us this music and we really liked it.”

Nazarova and Nikitin are currently helping the team with both programs as their main choreographer, Larisa Fiodorova, is in Kharkiv and is unable to leave. They spent two weeks with Pinchuk and Pogorielov in Vienna to help launch the new programs.

“We are in contact and we share videos with them until they are able to return to work with us more,” explained Pinchuk.

Meanwhile, the young ice dancers are hoping and waiting for two Junior Grand assignments for the upcoming season. Until then, they have been working on all the elements and have two new lifts for this season.

“We’ve been working hard on the step sequences to get the levels up,” said Pogorielov. “We are also working on the spins and twizzles. One of our goals is to be able to show more emotion in our programs.”

While they are adapting to Vienna and are grateful to the Austrian Skating Federation, they miss their home.

“We really want to return home to our native Kharkiv and see our families and friends,” said  Pinchuk. “I hope it’ll happen soon. But every night Kharkiv is being bombed and there is no good news. Unfortunately, one of my friends just lost her father on the front line.”

“The Russian athletes certainly did not start the war. Those who have distanced themselves from the regime should be able to compete under a neutral flag.” Thomas Bach, IOC President

“I’m of the St. Petersburg intelligentsia, a good person, but with problems. Сan problems be fixed? It’s an open question” Mikhail Kolyada about his new free program