The 2022 Olympic Figure Skating Team event continued with the Women’s Short Program and Men’s Free Skate on February 6, 2022, at the Capital Indoor Stadium in the Haidian District of Beijing. Team ROC overtook the lead by three points (45) ahead of Team USA (42) while Team Japan moved from fourth to the third (39) after the Men’s Free Skate. 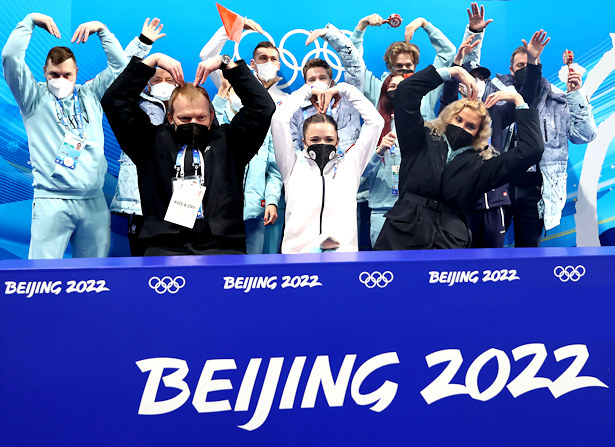 Kamila Valieva of Team ROC reacts with teammates following her skate in the Women’s Short Program Team Event on day two of the Beijing 2022 Winter Olympic Games at Capital Indoor Stadium on February 06, 2022 in Beijing, China.

Kamila Valieva (ROC) nailed a solid triple Axel with both arms above her head in her melodious routine to “In Memoriam” by Kirill Richter. The 2022 European Champion also landed a triple flip and triple Lutz-triple toe while earning many high grades of execution (GOE) for her level-four spins and footwork to finish first with 90.18 points.

Skating to “Your Song,” Japan’s Wakaba Higuchi opened with a strong double Axel, followed by a triple Lutz-triple toe and triple flip.  The 2018 World silver medalist had told the press that she had been feeling a bit “tight” in practices, but she finished second with 74.73 points—five point below her personal best from the IceChallenge earlier this season.

Skating to “Une vie d’amour” by Mireille Mathieu, Anastasia Gubanova of Georgia landed a triple flip-triple toe, double Axel, and triple Lutz. While the spins were graded a level four, the footwork received a level two by the judging panel and the 2021 Golden Spin of Zagreb champion scored 67.56 for her efforts to finish in fourth place.

USA’s Karen Chen underrotated the back end of a triple Lutz-triple toe and later fell on a slightly underrotated triple loop in her routine to “Requiem for a Dream.” However, the national silver medalist showed two strong level-four spins and footwork to finished fifth (65.20).

Ukraine’s Anastasiia Shabatova received an edge call on a triple flip, but landed a double Axel and triple Lutz-triple toe in her short to “Carol of the Bells” and “Shchedrick.” The three-time national champion earned a level four for both her spins and finished in seventh place with 62.49 points.

Eliska Brezinova of the Czech Republic earned a new personal best of 61.05, breaking the “60-mark” for the first time in international competition. The nine-time national champion turned out the front end of a triple Lutz-triple toe in her program to “Sweet Dreams,” but landed a triple flip and double Axel. 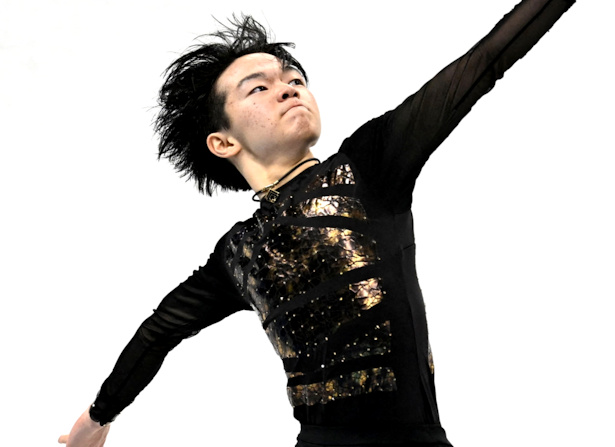 Japan’s Yuma Kagiyama performs his Free Skate in the figure skating team event during the Beijing 2022 Winter Olympic Games at the Capital Indoor Stadium in Beijing on February 6, 2022.

The top countries that qualified at the end of all Short Programs and Rhythm Dance determined which countries advanced to the free skates/dance. As such, the  Men’s Free Skate included: Canada, China, ROC, Japan, and the United States.

Japan’s Yuma Kagiyama pummeled his previous personal best with a new score of 208.94 after his technically difficult routine to music from the Gladiator soundtrack. The 2021 World silver medalist nailed his opening quad Salchow as well as quad toe, quad toe-1Euler-triple Salchow, and two triple Axels. The only error came when he turned out a quad loop. All spins three spins were awarded a level four and the quad Salchow and quad toes earned many  positive grades of execution (GOE).

Mark Kondratiuk (ROC) hung onto the landing of his opening quad toe in his performance to music from the Jesus Christ Superstar rock opera. The  2022 European Champion also landed a quad Salchow-triple toe and solo quad Salchow as well as two triple Axels, and produced two level four spins and footwork to finish second with 181.65 points.

China’s Boyang Jin was off to a good start in his “Bolero” routine with a solid quad Lutz, but then stepped out of a solo quad toe as well as the back end of a quad toe-double toe and triple Axel. The 2016 World bronze medalist received a level four on three spins and placed fourth with a new season’s best of 155.04.

Canada’s Roman Sadovsky gave a labored performance in his routine to “Chasing Cars” by Snow Patrol. The national silver medalist struggled with many of his jumps, underrotating a quad Salchow, and taking two falls—one on a popped triple Axel. He finished fifth with 122.60 points.

2022 Olympic Figure Skating Standings for the Team Event after Day 2.

“Basically were are very ecstatic about today,” said Team ROC captain Nikita Katsalapov. “Kamilia was perfect! She’s in perfect shape and we are happy for her and happy for the team. I think today was absolutely glorious. Everything was done cleanly, so once again, we are ecstatic.”

When asked about Valieva, Katsalapov said she is a “very fragile little girl”.

“And yet, she is a concentration of all the best quotas of a figure skater,” he said. “She’s the motivating factor for the entire team. She’s a fascinating athlete and worked very hard. She’s very ‘no-nonsense’ and watching her perform is sheer pleasure. It’s a delight. And she’s getting better from one competition to the next, so it’s very gratifying that we have people of her level—Mark Kondratiuk, Sashaa Shcherbakova, Alexandra Trusova. I mean they’re all young and up-coming and they are going to become the greatest names in figure skating. There is no doubt about that. They’ve begun their legend. They are living it.”

Team USA captain Madison Chock said the the skaters really fought through their performances and “performed their hearts out.”

“This is a team and we are there to support them regardless of the outcome,” she said. “It was a great day of skating,” added Evan Bates. “Very inspiring to these performances.”

In regards to possibly losing second place tomorrow, Bates said that when they are in the team box supporting each other they always want to see everyone go out and skate their best.

“When it happens, we are all very excited and we share in that camaraderie and team spirit,” he said. “But I don’t think going out and skating your best is necessary reliant on feeling that team spirit rolling over event to event. We’re all super prepared, very well-trained, and looking forward to when our name is called. I don’t think that one performance will impact the other, other than this is a team event and all of the performances matter. But in the same regard, that is what is so unique about this event, it’s about the collective and the whole.”

“Vincent and Karen are both Olympians and I think that experience is really invaluable,” Bates added. “Going to the Olympics is an experience unlike anything else and we always want to use our most experienced skaters, so in that regard, we really support the decision, and are very happy to have them on the team. Again, it’s about the collective. We’re all here for each other and will pick each other up.”

Misato Komatsubara said the two skaters from Team Japan really enjoyed their performances. “I’m very grateful that we were given the opportunity to deliver our performances,” said the team captain, thanking the organization.

“They were truly incredible,” added Tim Koleto. “I think it speaks to the amount of work that the Japanese Skating Federation has put into the sport in all four disciplines and we are so honored to share the ice with them.”

Of Kagiyama, Komatsubara said that while he was young, he was a very professional athlete.

“We have so much age difference, but today he told me he just had fun and didn’t get nervous,” she said. “I want to use that power that he’s giving us and showing to the world and hopefully I can do my best and make him feel happier, if it’s possible. I think he can do so much more.”

Husband and partner Koleto agreed: “It was really incredible watching some of the younger skaters, especially Yuma, whom we’ve had experiences with this year and last year. It’s a total joy to watch. I remember at Worlds last year watching Riku, Ryuichi, and Yuma, and how much strength they gave us to go out and do our best and leave our nerves at the side and do our best for Japan. I hope we can return that feeling tomorrow.”