Home What's New Safina and Berulava stand out in Tallinn 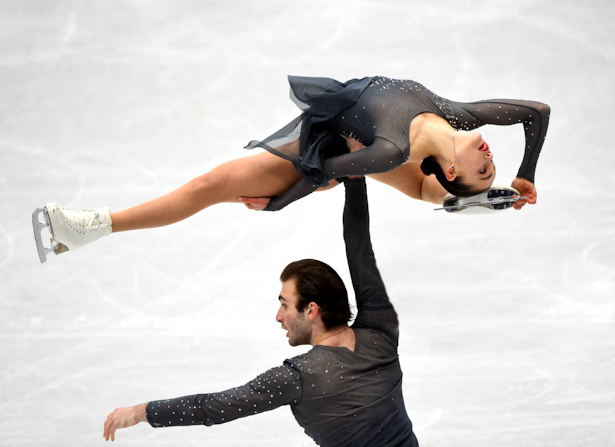 Georgia’s Karina Safina and Luka Berulava perform an a Lasso lift in their Short Program.

Georgia’s Karina Safina and Luka Berulava skated to the lead in the Pairs’ discipline at the 2022 World Figure Skating Championships on Thursday in Tallinn, Estonia. Anastasia Golubeva and Hektor Giotopoulos Moore of Australia are currently in second followed by USA’s Anastasiia Smirnova and Danylo Siianytsia.

Safina and Berulava delivered a near-flawless and powerful routine to “Moonlight” by Viper which featured a level-four triple twist, side-by-side double Axels and throw triple Salchow. The spin and lift were also graded a level four and the 2022 Nebelhorn bronze medalists also earned positive grades of execution (GOE) in all elements. They scored a new personal best of 67.77.

“We are satisfied,” said Berulava. “Everything worked out and we’ll continue to work.”

The busy team competed at both the Olympic Games and World Championships and the skaters say they focused and prepared the same way with this event.

Golubeva and Giotopoulos Moore lost points on a triple twist that was graded a level two, but landed the side-by-side double Axels and a good throw triple Salchow in their lively performance to “Fire Dance.” While the Lasso lift was graded a level three, the footwork and spin received a level four, and the 2022 Winter Star Junior Champions finished second with a new personal best of 61.72.

“We’re happy with how we skated today,” said Giotopoulos Moore.

The team was slated to compete at the World Championships, but as Golubeva is a Russian citizen, it took too long to process the visa and they were not able to compete in Montpellier.

When asked if they could change an element, Golubeva said, “I’d take out the double Axel and put in a triple toe instead.”

Smirnova and Siianytsia were off to a good start after producing a level-four triple twist in their charming routine to “Hey Big Spender,” but then Smirnova underrotated the side-by-side double Axels. However, the throw triple Salchow was solid and the 2021 U.S. Junior Champions earned a level four for the lift and combination spin to score a new personal best of 60.38.

“We’ll work further,” said Siianytsia, adding that they are a stronger team now then when they were two years ago when they finished 10th. “We are happy how it turned out today, but we still have tomorrow.”

They, too, would prefer to do side-by-side triple jumps (instead of double Axels) if given the choice.

Canada’s Brooke McIntosh and Benjamin Mimar is currently in fourth place (58.00) followed by Letizia Roscher and Luis Schuster of Germany (54.01) and Violetta Sierova and Ivan Khobta of Ukraine (49.57).

The Pairs event will conclude with the Free Skate tomorrow.