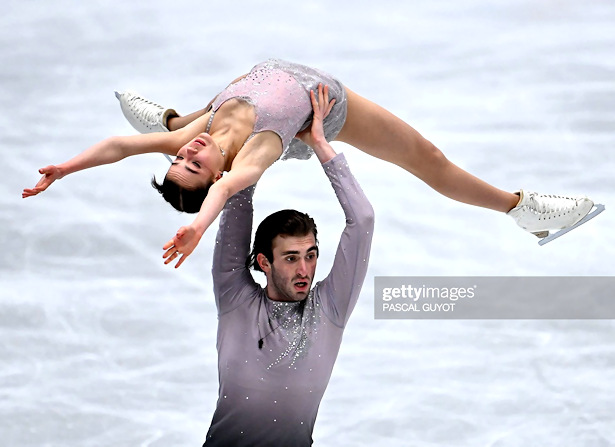 Karina Safina and Luka Berulava dominated the Pairs’ discipline to win the gold at the 2022 World Figure Skating Championships in Tallinn, Estonia. Anastasia Golubeva and Hektor Giotopoulos Moore of Australia maintained second to win the silver, while Canada’s Brooke McIntosh and Benjamin Mimar rose from fourth to capture the bronze.

Skating to “In This Shirt” by The Irrepressibles, Safina and Berulava executed a good level-four triple twist followed by clean side-by-side triple toe-double toe-double toes. The only major glitch came when she stepped out of the landing of the side-by-side triple Salchows. The 2021 Nebelhorn Trophy bronze medalists also produced a throw triple loop and throw triple Salchow. While the lifts and spin were graded a level four, the death spiral was a level two and they finished first in the free skate (120.35) and overall (188.12). It was the first time a Pairs team has won a gold medal for Georgia at this event.

“We are extremely happy to end the season on such a high note,” said Berulava. “It was a long and busy season with many competitions and to end it with a gold medal is really nice. We want to thank Georgia and the Georgia Federation president Maka-Mariam Giorgobiani. Without her, we wouldn’t be here. Thank you very much for believing in us. We are very happy to have won this gold medal for Georgia. We already have some figure skaters in Georgia and an ice rink will be built, so hopefully this will help the development of figure skating in Georgia.”

“We’ll continue to compete at the junior and senior level,” Safina said of their future plans. “Now we’ll have a little rest and will start to mount new programs, learn new elements and prepare for the next season as usual.”

Golubeva and Giotopoulos Moore produced a good throw triple loop and earned a level four on the lifts and spin in their free skate to “Sing, Sing, Sing.” However, small mistakes were made: the catch on the triple twist was a bit messy, she doubled the first jump in the side-by-side triple toe-double toe-double toes and also turned out the landing of a throw triple Salchow. The 2022 Winter Star Junior Champions scored 108.19 for second place in the free skate and posted a new personal best total score of 169.91.

“This is my first medal,” noted Golubeva. “We had some little mistakes in the program, but overall we’re very happy!”

“Everybody did an amazing job,” added Giotopoulos Moore. “It means a lot of us. It is a huge accomplishment and amazing achievement. We’re very happy and humbled to be on that list of people.”

The team will continue to train and compete on both the junior and senior level next season.

McIntosh and Mimar placed third (98.80) in the free skate after their performance to “Your Song” by Elton John and moved up one spot onto the podium with a total score of 156.80. The 2022 Bavarian Open Junior Champions showed good flow and speed, but Mimar turned out the front end of the triple toe-double toes and McIntosh went down on the triple Salchows. They otherwise produced a triple twist, throw triple Salchow, and throw triple loop, and earned a level four on their two lifts, spin, and death spiral.

“We’re just happy to be here,” said McIntosh, who thanked the International Figure Skating Union (ISU) and Estonia. “Our program was not perfect, but we’re happy that we got the medal.”

“We came here ready for this event and we knew we had to do our jobs,” she added of their expectations. “What the judges did and what the other skaters did was out of our control, so we focused on what was in our control.”

“Coming here we knew we have a chance to make the top five,” said Mimar. “We are happy with the result.”

The team will move up to the senior level next year as Mimar will have aged out.