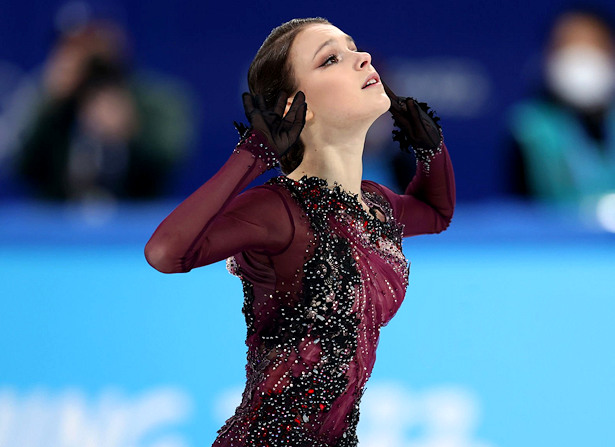 The Women’s Figure Skating for the 2022 Winter Olympics concluded with the Free Skate on February 17, 2022, at the Capital Indoor Stadium in the Haidian District of Beijing. Anna Shcherbakova (ROC) skated her way to gold while teammate Alexandra Trusova (ROC) took the silver. Japan’s Kaori Sakamoto finished third to win the bronze after Short Program leader, Kamila Valieva (ROC), faltered in the free skate in the controversial event.

Shcherbakova was solid in her program to “Ruska” and “Lacrimosa” which featured a quad flip-triple toe, quad flip, and five triple jumps. The 2021 World Champion earned many positive grades of execution (GOE), particularly on the quad flips, while showing level-four footwork and spins throughout her routine. She finished second in the Free Skate with a new personal best of 175.75, and with a total score of 255.95, finished first overall.

“I did all of my elements, which I’m very happy about, and I did a clean skate,” said Shcherbakova. “I was focused, I was staying present, and in the end, the clean skate is everything I wanted to show. My goal all along at these Olympic Games was to go out on the Olympic ice and show the best I can. I gave it everything I had. I left the Olympic ice knowing I gave it my very best.”

“It means so much!” she said of winning the gold. “The importance of this is so huge that I cannot fully understand it yet. At the moment, I have only felt the happiness from the fact that I was able to do everything I am capable of in my program. Apart from that, I cannot really tell you more because I still haven’t realized it fully.”

Trusova received an edge call on her opening triple flip, but nailed a quad Salchow before stepping out of a quad toe in her popular routine to music from Cruella. The 2021 World bronze medalist also two-footed and turned out the landing of a double Axel-triple toe, but landed a clean clean quad Lutz-triple toe in the second half of her program. However, the next jump, a quad Lutz, was slightly underrotated and the change combination spin and footwork were graded a level three. Nevertheless, she earned a new personal best of 177.13 and rose from fourth to second overall (251.73).

When asked why she cried after learning she took silver, she said: “Just because. I wanted to cry, so I cried. I’ve been here for two weeks, alone without my mom, without the dogs, so I am crying.”

Later in the press conference, Trusova said she was glad she did the five quad jumps and that it took her a long time to achieve them. When asked if she liked USA’s Nathan Chen and was compared to him, she said she’d like to “emulate him.”

Trusova later explained her comment about “hating the sport” stating that she hadn’t won any important competitions in the last three years. She felt that by achieving her goals on learning and performing quads that this would happen.

Sakamoto gave a near-clean skate in her poetic routine to “No More Fight Left In Me” and “Tris” to finish third in the Free Skate with a new personal best (153.29) and overall (233.13). The two-time national champion, who was sixth at this event four years ago, landed a total of six solid triple jumps. A triple Lutz received an edge call, but two spins and footwork were graded a level four and she received many positive GOEs throughout.

The 21-year-old from Kobe, Hyogo, was very surprised when she learned she had won the bronze. The skater said she was so focused when skating that she felt “hungry” now.

“I am simply quite happy for now,” said Sakamoto. “Ever since the last Olympics, the last four years have been very challenging and struggling years, but I could work very hard because of that difficult challenge. My coaches were very helpful and didn’t give up on me. I’d like to thank them and the fact that I finished better than in Pyeongchang.”

“Wakaba (Higuchi) came to me and was almost crying when she congratulated me, and that made me very happy,” said Sakamoto. “After my performance, when I went to the green room, we were sitting together. After Anna (Shcherbakova) skated, Wakaba had to leave the room and I couldn’t even imagine that I’d win the bronze. I told her, ‘I’ll be catching up with you, I’ll be out of this room.’”

Kamila Valieva (ROC) made numerous errors in her labored routine to “Boléro” beginning with a slightly underrotated quad Salchow and a step-out on an underrotated triple Axel. The level-four spins and footwork all received very high GOEs, however, she took a fall on quad toe-triple Salchow sequence and a quad toe. While the triple flip-triple toe was clean, she put a foot down on the landing of the final jump—a  triple Lutz-triple toe. The 2022 European Champion finished fifth in the Free Skate with over 40 points less than her personal best (141.93) and slipped to fourth overall (224.09).

Japan’s Wakaba Higuchi landed a triple Axel, but underrotated and fell on the triple Lutz-triple toe in her “Lion King” routine. The back end of a triple Lutz-triple toe was called slightly underrotated while the flip, once again, received an edge call. However, the two-time national champion received a level four on two spins and very good footwork to place sixth (140.93) in the Free Skate and fifth overall (214.44).

“It was a program that will take me further down the road,” Higuchi said of her placement. “I made the triple Axel. I am so satisfied for accomplishing that.”

Higuchi admitted to being nervous in general regarding her experience at the Olympic games.

“It was surreal, how time flies!” she said. “I felt like Alice in Wonderland. It’s an amazing experience, getting to skate in my best form on this stage.”

“I had a bite of the bitter part of the Games,” she added, regarding not making the podium, “but also the sweet part of it. It’s the best stepping stone for my athletic life in the next four years.”

“I’m very happy that I didn’t make a lot of mistakes with my short and long in the Olympics,” said the 17-year-old from Seoul. “That’s the happiest thing I felt.”

USA’s Alysa Liu also underrotated her triple Axel, and with the exception of a edge call on a triple flip-double toe, landed a total of six clean triple jumps. All spins and footwork in her routine to Tchaikovsky’s “Violin Concerto in D op.35” were graded a level four and the 2020 World Junior bronze medalist finished seventh (139.45) in the Free Skate and overall (208.95).

“I’m really glad I went for everything and didn’t fall,” laughed the 16-year-old from California. “I’m still in shock at how well I did. I worked a lot on this and I’m glad I did two clean programs. I’m making a lot of memories here, and they’re all really good ones.”