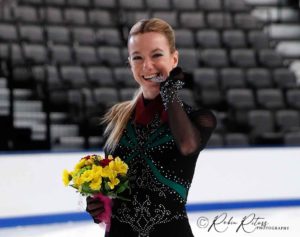 Get Paid To
Do Simple Jobs
On Social Media
Sonja Hilmer is a skater who does things her own way.

Take the never-before-seen triple salchow-reverse rotating double salchow jump combination she’s been doing in her free skate this season. Or the not-often-seen skill of spinning in both directions.

Or that she hasn’t limited her focus to just freestyle — she’s passed all the U.S. Figure Skating pattern dance tests, both with a partner and solo, and solo free dance.

And after a decade of competing on the regional and sectional circuit, Hilmer is making a splash in the senior division this year, at the age of 23, with a goal of making it to U.S. Nationals for the first time.

“I really expect this year to be my year. Nationals would be my number one goal,” Hilmer said during a phone interview. “And then I have unlocked this new realm of where I can score, as far as what my total score is, so I’m always looking at getting in that range.”

She seems to be right on track for those goals, with a win and new personal best total score of 177.72 at the Glacier Falls Summer Classic, plus a silver medal in her first international appearance, at the Cranberry Cup. As of publication of this article, she sits in third in the National Qualifying Series (NQS) standings, where skaters earn points to qualify for their sectional final and a chance to skate for a spot at Nationals. Her scores at Glacier earned her a spot in U.S. Figure Skating’s International Selection Pool (ISP) for the second time in two years, and her first invitation to the high performance camp that the federation hosted right after that competition.

Next, Hilmer will compete at the U.S. International Classic in Lake Placid, New York, from Sept. 12-16, representing Team USA for the second time this season. So what, exactly, is fueling this breakout season?

“Last season, I started to realize that I just had so much fun when I expressed myself as how I wanted to be and when I showed off what I was so proud of. And it might have been different from the other skaters, but it meant so much to me, and I was starting to realize that it meant a lot to some other people, too,” Hilmer says. “And I just took it and ran with it, and it’s really what brought me to where I am now.”

And where Hilmer is now is in the spotlight, whether it is on social media or on competition ice. “Starting at Glacier, I think, I started getting eyes, people looking over, because I did the salchow combo for the first time at Broadmoor,” she says. “And then the word started to go around and stuff. And I’ve been making my niche as a choreographer, also. So I had a lot of connections, people who knew me, what I was doing, and the originality and all that. But it really started to take off when I got the confidence to just perform how I wanted to. And it’s been so fun.”

Hilmer’s short program this year is a medley of two Christina Aguilera songs, “Beautiful” and “Fighter.” She chose the music last year, after hearing “Fighter” playing in the background after the end of a competition. “I thought, ‘This would make a bomb step sequence,’” Hilmer says. 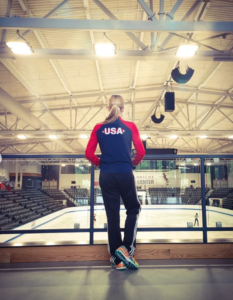 She will be debuting a new free skate at U.S. Classic, set to music from the Netflix series “Arcane,” an animated action-adventure series. “For the free skate, I’m using the soundtrack that I used for the Peggy Fleming Trophy this season, ‘Arcane,’ based on League of Legends,” Hilmer says. “People who follow me, they’ll know I really enjoy that universe and their music is top-notch. It’s a very beautiful, very emotional sort of piece, and the second song is sung by Sting, so you can’t go wrong there.”

Hilmer won bronze at the Peggy Fleming Trophy in June, when she first used that music, and the next time she skates to it, she’ll be representing Team USA in Lake Placid, wearing the USA jacket for the first time. At Cranberry, her friend and former Team USA competitor Courtney Hicks lent her a USA jacket, a supportive gesture that was much appreciated, but Hilmer is ready for a jacket of her own.

“The jacket in itself means a lot, because it’s like ownership of everything that I’ve done so far. Having something material that can represent that,” she says. “I’m really excited to go see Lake Placid itself and have the experience of the travel, the roommate that U.S. Figure Skating arranges for the international competitions, having official practice ice again and that schedule.”

Finding Her Training Home in Colorado 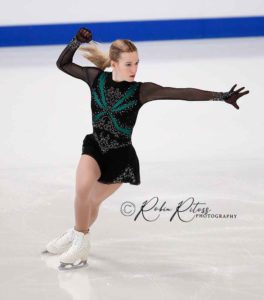 Hilmer’s journey to skating for Team USA started when she first encountered skating in a Muppets book. She decided she wanted to give it a try, and took her first steps on the ice at age three and a half. Her cousin, former Team USA pairs skater Colette Appel, was the first to take her on the ice. Hilmer grew up in South Salem, New York, and started her skating career in Newington, Connecticut.

“It’s so fun to think of what I would think of myself now. I was just thinking about my first regionals, in Vermont in 2010, and that was so exciting for me. And I think she’d be very proud of where I am now,” Hilmer says.

Hilmer, an only child, and her parents moved to Colorado for her training just after she turned 16. Initially, she trained in Monument with Kori Ade and Rohene Ward, who has been a major influence on her choreography, and then she worked with Doug Ladret and moved over to the Broadmoor Skating Club in Colorado Springs. Now, she is training with Tammy Gambill, Eddie Shipstad, and Sandy Straub, and represents the Centennial Skating Club.

“I’m really grateful that throughout this whole process, I was allowed to have a big say in what I wanted to do with my programs, and I kind of take charge of my training,” Hilmer says. “I’m good at running the programs and I have a good time. It’s still fun for me. So I think every step along the way was exactly what it was supposed to be.”

Skating for the Love of It 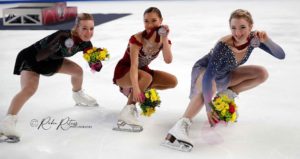 At Hilmer’s age, skaters are often considering a retirement for college or a transition to coaching. And while she does choreography both for herself and other skaters, she isn’t ready to hang up her competitive skates just yet.

“What keeps me skating is I still love it. There’s not really a feeling that’s quite the same as an edge gliding across the ice,” she says. “I’m really grateful that I’ve seen multiple generations of skating and pick out what I personally like about all of them, because there’s been so many stylistic changes and technical changes. I still remember watching Alissa Czisny as my favorite competitor on TV. [I’m] drawing from the old era and keeping that alive, while still embodying the new, more innovative aesthetics of what we have now.”

Hilmer brings the deep knee bend and presentation of classical 6.0-style skating to her performances, while also being mindful of how to maximize points in the IJS. The salchow combination that is garnering so much attention counts as a two-jump combination and emerged as a solution to Hilmer wanting to avoid a double loop as the second jump in a combination. It’s that creativity that is getting her noticed, by fans and judges alike.

“It’s just kind of how I am. For the longest time, if I had an extra 10 minutes or had finished everything for the day, I would just go out and do random stuff,” Hilmer says. “And people would be like, ‘That’s so cool.’ And I’d be like, yeah, it doesn’t count for anything, though. And then I finally did the salchow in competition, because at that point, it was like, just see what happens. I’m all about reading the rules and figuring out what still matches what it says, but it’s not what they’re expecting.”

Hilmer is also influenced by her experience in ice dance and solo dance. When she passed all her moves in the field tests by the age of 11, she started ice dance to help with her skating skills. She says it taught her how to control her feet and her blades on the ice, and helps with transitions and composition in her competitive programs today.

She is a five-time U.S. Figure Skating gold medalist: moves in the field, freestyle, pattern dance, solo pattern dance, and solo free dance. As a choreographer, she enjoys matching the sounds in music to steps and elements.

“[Saying] this particular part of the music sounds like this step, or this is where the spin goes, I’ve gotten very attuned to hearing that in soundtracks,” Hilmer says. “What I like most about choreographing for myself is that I get to understand my body more, which is extremely important in athletics in general. It’s been really great to explore movement and to challenge myself.”

Creativity, On and Off the Ice

And she isn’t only creating programs — she also makes her own costumes (a new one for this season was on the sewing machine as we talked, she said) and has made some shirts for her friend and former Team USA competitor Jordan Moeller.

Making art in various forms is often where you’ll find Hilmer when she’s not on the ice. If there is a Zamboni break, she’s working on embroidery or drawing. And she’s taken some college illustration classes, after completing her high school diploma online after moving to Colorado. Hilmer also competes in cosplay craftsmanship.

“It’s a bunch of people who have either taught themselves or gone through the profession of costume making with all different sorts of materials, and basically showing off what they made,” she says. “You’re judged based on your skill level and your cleanliness and how it fits and all that. So I’ve taught myself everything from sewing to foamsmithing, which is making armor out of foam, resin casting, and embroidery.”

Creating the costumes is a great way to decompress after training, she says, and you can check out her designs on her @optical.phenomenon Instagram account. Hilmer posts her art and other crafts on her @jay.co_art Instagram account, and she also shares the adventures of her pet bird Dobby on @dobby.the.conure.

And if three Instagram accounts wasn’t enough, she also shares her on-ice creativity on @gosanjaygo_03. Follow along there as Hilmer continues her quest for her first trip to the U.S. Championships. “I’m really excited to see what I can put out there and how far I can take it,” she says.