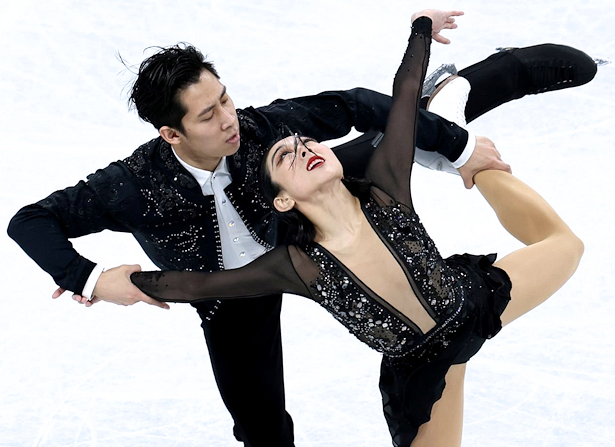 China’s Sui Wenjing and Han Cong compete in the Pairs’ Short Program of the figure skating event during the Beijing 2022 Winter Olympic Games at the Capital Indoor Stadium on February 18, 2022.

The Pairs’ Figure Skating event at the 2022 Olympics kicked off with the Short Program on February 18, 2022, at the Capital Indoor Stadium in the Haidian District of Beijing. Wenjing Sui and Cong Han of China are currently in first, followed by Evgenia Tarasova and Vladimir Morozov (ROC) and Anastasia Mishina and Aleksandr Galliamov (ROC).

Sui and Han produced a spectacular routine to music from Mission Impossible 2, nailing their side-by-side triple toes, a throw triple flip and level-four triple twist. The 2018 Olympic silver medalists also earned a level four on the lift, spin, and and footwork, racking up loads of high grades of execution (GOE) along the way. They topped their record score from the team event with a new personal best of 84.41 points.

“We feel so happy!” said Sui. “We really enjoyed the skating today. “I am so honored to break the record (highest score ever in a short program) in my motherland. But the short program is just a start. We hope to show our highest level in the free skating. We feel like when we show our best selves to the world, the world belongs to us. Only during these several minutes, perhaps billions of people around the world are looking at us.”

“We did our best and enjoyed this whole process,” said Han, who likes to play The Legend of Zelda to block the pressure. “We’re happy about the score and the recognition of the spectators, and we made a world record. It’s important for us to catch the opportunity when we have it. We hope we can show our best technical (skills) and artistry to show the four years of our hard work.”

Four years ago in Peyongchang, Sui and Han found themselves in the exact same spot after the Short Program with Tarasova and Morozov trailing right behind.

“Each competition is different, but this time it’s extremely different for us because we are competing in our home country,” said Sui. “It empowers us to perform better.”

“They are our friends and competitors,” she added, of Tarasova and Morozov. “This is something we are very proud of, because we can maintain this high level of competition between the two pairs, and it has been more than 10 years. It’s a wonderful thing to compete with each other. We are improving because of each other.”

Tarasova and Morozov were near-flawless in their routine to music from the W.E. soundtrack, landing side-by-side triple toes, a level-four triple twist, and throw triple loop. The two-time world silver medalists also earned oodles of high GOEs for their level-four footwork, lift, and spins to earn a new personal best of 84.25.

“I don’t think these were terrible mistakes,” responded Morozov, when asked to compare their their performances from earlier this season. “There were some good starts and bad ones, but everybody’s working at it and improving their program, their skating. We’ve been working for these Olympic Games. Today we showed you the result of our work.”

One by one, teammates Mishina and Galliamov checked off the boxes in their skate to music from La Esmeralda, delivering a level-four triple twist, throw triple flip, and side-by-side triple Salchows. All other elements received a level four, and the 2021 World Champions were also rewarded with high GOEs, especially for the throw triple flip and triple twist. They topped their previous best score from the team event with 82.76 points for third place.

“The result speaks for itself,” said Galliamov. “We tried our best to perform a clean skate, and we did all the elements, executed (them) well. All in all, we are happy with our performance. We have mixed emotions, because we already understand the responsibility which is required of us after the team event.”

“We are going to do what we’ve always done—go out there and show our best work and just enjoy ourselves being on the Olympic ice again,” said Mishina regarding the Free Skate.

Skating to Swan Lake, Aleksandra Boikova and Dmitrii Kozlovskii (ROC) nailed their side-by-side triple Salchows and a level-four triple twist, but Boikova put a hand down on the landing of the throw triple flip. The lift and death spiral were graded a level three, while the footwork and spin were a level four, and the 2021 World bronze medalists took a new season’s best of 78.59 four fourth place.

Peng Cheng and Jin Yang skated an inspiring routine to Alicia Key’s version of “Piano & I: Moonlight Sonata,” impressing with a level-four triple twist with one arm extended, side-by-side triple toes, and a throw triple loop. The 2020 Cup of China Champions are currently in fifth with 76.10 points.

“I think the score is as we expected,” said Cheng. “I was only unsatisfied with the throw triple loop, which I think was imperfect. If I did that better, we would have higher score.”

“Today we have a good competition status, we hope we can keep it for free skating tomorrow,” added Yang. “Just enjoy the competition and the performance.”

USA’s Alexa Knierim and Brandon Frazier put out a good performance which featured a level-four triple twist, side-by-side triple toes and a throw triple flip in their routine to “House of The Rising Sun.” The 2021 Internationaux de France bronze medalists placed sixth with 74.23 points.

“I’m really proud of it,” said Knierim of their performance. “We stayed committed to the plan. We’ve trained so hard to enter, stayed through whatever it brought to us. I feel like today we did a good job of staying focused no matter what we felt to deliver the best we could.”

“It’s an absolute dream come true,” said Frazier on competing at the Olympics. “I have so many feelings of satisfaction that I achieved everything I set out to do. To be here with a partner that’s so strong, and giving the same amount of effort you give yourself, it’s something you can’t beat. I’m enjoying every second of this experience and I can’t be more grateful.”

Teammates Ashley Cain-Gribble and Timothy LeDuc are currently in a very close seventh place with a season’s best of 74.13. The 2022 U.S. National Champions were nearly clean with the exception of a foot down on the landing of a throw triple Lutz.

Cain-Gribble has been nursing an injury to her right ankle.

“In the last 24 hours I’ve been able to get all the care I need to put on a strong performance today,” she said. “I just felt I did not want to let anything go. In the last two years what we’ve learned the most is how to adapt to what has come our way, and this was just another thing that we needed to adapt to.”

“When I went out there, I just focused on what Timothy and I could control, and it was putting out a performance like that,” she added. “Everything felt good and in our control.”