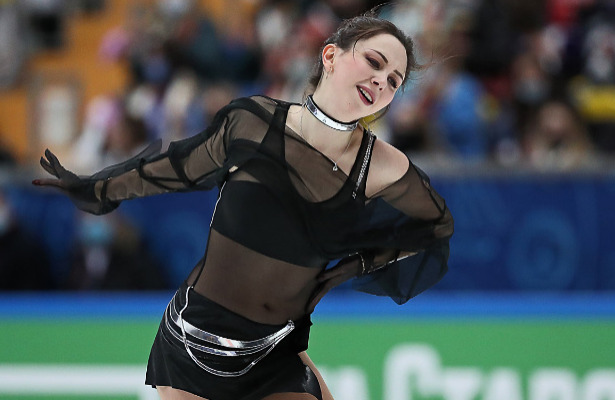 Elizaveta (Lisa) Tuktamysheva made a successful return to the world stage this season, proving that not only tiny teens can be at the top of the sport in figure skating. Last month in Stockholm, Sweden, the 24-year-old claimed the silver medal, behind teammate Anna Shcherbakova, who turned 17 during the event, and ahead of 16-year-old Alexandra Trusova. This comes six years after she won her first World title in her last appearance at this event in Shanghai, China.

At the recent ISU World Team Trophy in Osaka, Japan, Tuktamysheva as captain led the Russian team to their first victory in this event. Now back home in St. Petersburg, the 2015 European Champion is eager to start her preparation for the upcoming Olympic season and to fulfill her dream to make it to the Games. In any other country heading into the Olympic year as the World silver medalist, you would not have to worry too much about making the team. Not so in Russia. The field is so deep that half a dozen young women are strong enough to be medal contenders at any major competition.

Tuktamysheva knows what she has to do in order to be competitive and she is ready to get started, particularly on the quad toe loop.

“I think I have to balance out the quad toe and the triple Axel in the Free Skating so that I have one quad,” she said. “I am doing it, but it is not yet that consistent. I want to work on it for the upcoming season so that it is practically as consistent as my triple Axel.”

The skater also wants to try the quad Lutz. “This is my dream,” she revealed. “Many people are telling me that I am capable of doing it, but I have trouble believing that it is possible. I want to do it, just to prove to myself that it is possible. I think I’ll have a chance to make it to the Games with a quad. The level is very high now and it would be harder (to qualify) with just two triple Axels.”

Tuktamysheva, who is coached in St. Petersburg, Russia, by the legendary Alexei Mishin and Tatiana Prokofieva, now wants to get new programs before her vacation that is scheduled for mid- May. The music is not yet decided, but at least one choreographer is confirmed. Nikita Mikhailov, who did her Short Program to “Lovely” this season, will build the new Short again. The choreographer for the long program has not yet been determined.

“I would like to have a music that is really me, something bright and beautiful,” the 2021 World silver medalist shared. “I think I’ve skated to all great music already, but maybe we’ll find something interesting. We want to do the programs before the vacation so that we can start breaking them in right after and don’t lose time.”

In 2015, Tuktamysheva claimed the World and European titles, but she struggled the following seasons. The athlete has been on the rise again since the 2018-19 season. Now she feels she knows what to do to avoid this kind of downturn after a high.

“I think that (decline) happened because of my youth,” the Russian skater said. “Maybe I was not ready for it emotionally. I think it happens to many skaters that they hit a low after one or two successful seasons. When you are grown up and more conscious, it gets easier, of course. While this season was successful for me, I won’t say that I was skating a lot better than last year. I was doing two triple Axels last season already. I will try to keep myself at that level to stay at the top in figure skating. I don’t want to lower the bar.”

Tuktamysheva feels that her struggles post-2015 Worlds also came from putting too much pressure on herself. “The main thing I realized is that you need to work on things step by step, to know that you are on the right track and not throw yourself into the triple Axels and quads right away and then be upset when it doesn’t work after a month. I understood for myself that you cannot put too much weight on yourself that you cannot carry.”

Tuktamysheva has proven that she is able to land the quad toe and triple Axel-triple toe loop combinations in practice. She has also upgraded her combo to a triple Lutz-triple toe in both programs.

“When I am in a good mood, good shape, that I can work on the (triple Axel) combination with the triple toe, it gets easier for me,” she pointed out. “Everything comes from you head. I think that my body can do anything, it is just my head that stops me a little bit. But we’ll work on that.”

When Tuktamysheva was selected to be the captain of the Russian team at the 2021 ISU World Team Trophy, she was both surprised and honored.

“At first, I was bit nervous, because it was the first time for me to be in that role and I know that the team competition is full of emotions when you need to support each other,” she recalled. “This is not like the single skating events when you focus just on yourself. Here, you are surrounded by that energy all the time.” The 2015 World Champion managed to handle the emotions and keep the energy going while skating two clean and strong programs.

The 24-year-old has become an idol for many young skaters. “She is like the statue of liberty for the women in figure skating,” coach Alexei Mishin said. “Lisa can hold on to the feeling that she can still do it. When a person does a triple Axel, a quadruple toe loop, at least in training, it shows that they are at the forefront of the current state of the sport. And that feeling that she still can do it is what helps her.”

Tuktamysheva wants to set an example for other women that they can be successful and achieve their goals. This does not go unnoticed. Recently the skater received the “Superwoman Award” of a popular Russian magazine.

“I was surprised that they selected me among the female athletes,” the 2020 Rostelecom Champion shared. “To receive this award was extremely nice, because I now more and more want to show female power. I feel that power inside myself and I want to prove to other women that anything is possible. I think that each woman has a lot of power and each one deserves happiness. I really want women not to doubt themselves. This is very important.”