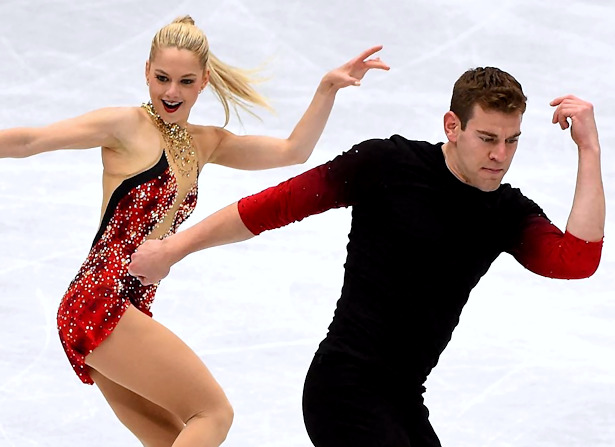 USA’s Alexa Knierim and Brandon Frazier currently lead the Pairs event at the 2022 World Figure Skating Championships after the Short Program took place on Wednesday in Montpellier, France. Teammates Ashley Cain-Gribble and Timothy LeDuc are close behind by just over a point, while Japan’s Riku Miura and Ryuichi Kihara sit in third.

Knierim and Frazier scored a new personal best of 76.88, topping their previous best at last month’s Olympics where they finished sixth. Their routine to “House of The Rising Sun” by Heavy Young Heathens was rock-solid and featured a triple twist, side-by-side triple toes, and throw triple flip. All elements received positive grades of execution (GOE) and the spin, death spiral, footwork, and lift were graded a level four.

“We feel very fulfilled,” said Fraizer. “We’re proud of ourselves for continuing to build at each competition for our second season together. It takes a lot of time to build in the international circuit; I think we’re just doing our best each time.”

“We’re very grateful to be here and have a chance to do these programs again,” added Knierim. “Going out and skating well – skating like we do at practice – is very fulfilling. It’s a nice way to end the season in the SP segment.”

Cain-Gribble and LeDuc produced a good triple twist in the opening of their routine to music from The White Crow, but then Cain-Gribble put a hand down on the triple toes. The national champions rallied back with a strong throw triple Lutz and earned a level four for all other elements along with positive GOEs. They are on the heels of their teammates with 75.85 points.

“It was really hard mentally and physically (after the Olympic Games),” admitted Cain-Gribble. “We reached the peak of what we always wanted to do and it’s kind of hard to come back from that. But you just have to trust your training, trust the people around you to get you through it.

“I think right now we’re focused on doing what we need to do on the ice,” said LeDuc. “Skating our best and also standing in solidarity with Ukraine right now. We’ve been training really strong all season. We’ve been building, building, building, we’ve put in so much training, we just want that to show, so we’re ready to go out there and execute like we do in practice.”

Cain-Gribble added that her ankle and leg injury are much better. “I was able to put in a lot of hard work at home that made me confident in my abilities here. I got all the proper rehab done and it feels good.”

Miura and Kihara had a strong start with a triple twist, clean triple toes, and level-three lift, but she stepped out of (and put a hand down) on the throw triple Lutz. The spin and footwork were graded a level four, and the 2021 Skate America silver medalists finished third with with 71.58 points for their routine to “Hallelujah.”

“Although there was one big mistake, I was determined to finish the program with a smile because it was our last ‘Hallelujah’ program and think I was able to do that,” said Miura.

“Besides the big mistake, we missed some of the levels, the lift,” added Kihara. “I have to look it over and try to fix it before the free skating. The throw jump, after the dance lift… we were not able to pick up the regular speed, so the timing for the throw jump was off and that was the mistake.”

Georgia’s Karina Safina and Luka Berulava, who finished ninth in Beijing last month, are in fourth with a new personal best of 67.36 points. Their program to “Moonlight” by Viper featured a level-four triple twist, triple toes, and a throw triple loop.

“We skated as we did before the Olympics, we skated the same,” said Berulava. “We were in Italy, a huge thanks to the Italian federation for their help, but the rest was the same. We haven’t changed anything.

“We’ll go out and do what we did the whole season,” said Safina of the Free Skate. “We’ll try to do our best. We work on the things, sometimes they work better, sometimes worse.”

Vanessa James and Eric Radford of Canada made two errors when Radofrd put a hand down on the triple toes and James put a foot down on the throw triple flip. The triple twist was good, as was the level-four lift and combination spin, but the death spiral only received a base value. They sit in fifth with 66.54 points.

“I think this performance was just a little shaky technically, but really well-executed performance-wise,” said Radford. “I think we managed to improve our fluidity and speed and transitions. I haven’t put my hand down on a triple toe in probably two or three seasons? But I think when we hit our ending position, we feel like we performed it, we enjoyed the moment, we skated from the heart for the audience.”

“Even with the minor mistakes, we did work very hard after the Olympics on getting our levels, which is mission accomplished because we got most of the levels back except for the (back outside) death spiral, which was a little tight today,” added James. “But everything else was much better than at the Olympics, so that’s something to be very proud of. I felt very, very happy to be on the ice today.”

Germany’s Minerva Fabienne Hase and Nolan Seegert are close behind in sixth place with 66.29 points. Their routine was highlighted by side-by-side triple toes, a throw triple Salchow and level-four lift.

“We are very satisfied with the skate and relieved that it worked out this time,” said Hase. “It’s a program one can end the season with. The audience was very supportive.”

“There was only a toeloop that went wrong in the warm-up, otherwise everything was fine,” said Seegert. “Today it was much more fresh than at the Olympics, in any case much better. The training time before the Worlds was quite short, but better than nothing.

Miriam Ziegler and Severin Kiefer of Austria are currently in seventh (60.79) followed by Canada’s Evelyn Walsh and Trennt Michaud (60.28).

The Pairs event will conclude tomorrow with the Free Skate.