Home What's New USA’s Lu and Mitrofanov: ‘It means everything’ 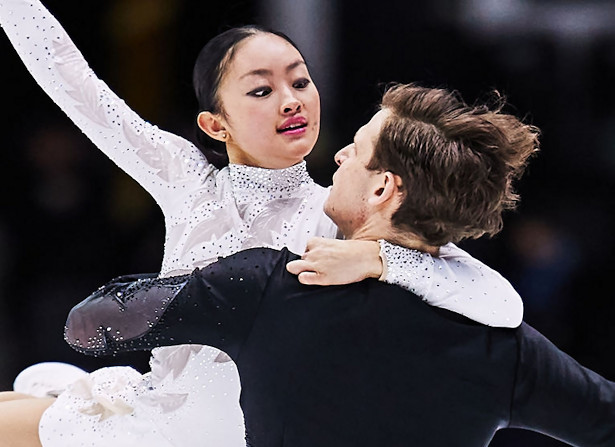 USA’s Audrey Lu and Misha Mitrofanov skated to victory for the Pairs’ title at the 2022 Four Continent Figure Skating Championships on Saturday in Tallinn, Estonia. Teammates Emily Chan and Spencer Howe moved up one spot to claim the silver, while Canadians Evelyn Walsh and Trennt Michaud slipped to third for the bronze. It was the first time that these three teams, including several others, had competed at this event.

Lu and Mitrofanov opened their routine to “Ancient Lands” by Ronan Hardiman with a level-four triple twist and side-by-side triple Salchow-Euler-double Salchows, but Lu went down on the triple toes. The 2021 Golden Spin Champions quickly recovered to produce a solid throw triple Lutz, throw triple loop, and two level-four lifts and finished first in the free skate and overall (120.75/189.10).

“It means everything!” said Lu of winning the gold. “There were a few mistakes here and there, but we put up a good fight and I am happy.”

“We didn’t put our best performance for long program,” agreed Mitrofanov. “We were happy that we put out a very solid short program, so we’re going to go back and start training harder. We’re happy with the win, but there’s always more we can improve. It never stops.”

The 2022 U.S. bronze medalists are currently second alternates for both the Olympics and Worlds.

Chan and Howe showed a good level-four triple twist and side-by-side triple Salchow-Euler-double Salchows, but she took a fall on the throw triple loop in their routine to “Elegy For The Arctic” and “Divenire” by Ludovico Einaudi. The new team from the Skating Club of Boston also showed good level-four lifts, but Chan underrotated the triple toes and stepped out of the throw triple Salchow. They finished second in the free skate and overall (116.47/180.94).

“They are always consistent,” said Chan of the the throw jumps. “Maybe we could have worked it a bit better. The twist is getting easier, we’ve been working on it a lot. For me, being a single skater, to rotate a little bit sideways was very new and felt a little strange for me when I first started and I had to get accustomed to that.”

“I was proud of Emily for going into the Sal (Salchow) and fighting for it,” added Howe. “Even though it wasn’t a perfect take off—she was a little tilted, she managed to stay on her feet, so I’m proud of her for that.”

Chan and Howe are the third alternates for the Olympics and the Four Continents was their last planned event.

“It was a good showing for us,” said Howe. “We’ll continue improving our elements and continue to improve our skating, which is our strength. We both have done up to triple Lutz. Emily was a great single skater—national Junior champion—so we have just been changing the focus more on the pairs elements since this is what we would need to focus on. It’s something I want to continue to work on and may be adding more difficult jumps and combos.”

Walsh and Michaud opened their routine with a back-inside death spiral and followed up with a level three triple twist. The 2022 Canadian silver medalists also produced a throw triple toe and two level-four lifts, but she doubled the first jump in a triple toe-double toe combination and slightly underrotated the side-by-side triple Salchows while he turned out his. She also put a hand down on the throw triple loop and the team struggled on the final lift which was graded a level one. They finished third in the free skate and overall (114.28/179.70).

“Honestly, there were some good things, but we just did some costly mistakes and the lift at the end was a huge cost for us unfortunately,” said Michaud. “We’ve been skating so well and training so well, and we’re just disappointed that we couldn’t fully show all of that today.

“We’ll keep training this season as we are alternates for the Olympics and Worlds,” added Walsh. “We have a lot of things to go back and fix in this program, and we have to keep moving forward.”

Canadian bronze medalists Deanna Stellato-Dudek and Maxime Deschamps finished fourth in the free skate and overall (113.64/172.71) after some costly mistakes as well.

“Every time we go out internationally, we’ve skated the same, which is not great, with lots of mistakes,” said Stellato-Dudek. “This is unfortunate, because we practice much better that that. We’ve done domestic events much better than that, so it’s just frustrating continuing to come out and not even be close to our potential or at the full amount.”

Deschamps contracted COVID not too long ago and was off the ice for two weeks.

“The week of our nationals, he was back that Monday and we competed on Friday and Saturday, so we haven’t had the numbers we normally have coming into this event,” said Stellato-Dudek. “I’m happy that we came here and we fought through the whole thing and we still put out some good things.

Stellato-Dudek is still working on getting Canadian citizenship, so the team is focusing on 2026.

“I’m very well aware how old I will be at that time and I don’t think that there is a problem with it,” she said. “I feel fine. I’m probably in better shape than I’ve ever been, and we are able to train just as much as 10-year-olds at our rink. I take really good care of myself and my body to make it possible. I kind of feel like in a way I’m in my prime with the intelligence we use towards our training, as well as the creativity we have with some of the elements that we do.”